George M. Hawkins, Jr. (Navigator), Wilfred F. Miller (Tail Gunner), and Harry A. Liniger (Waist Gunner) who were aboard the Lazy Daisy all survived the mid-air collision with the Lead Banana on September 28, 1944.  Hawkins wrote what he knew of the accident after he returned home from the war in 1945.  His account, as follows, is included in MACR9366:

Following “Bombs away” at our target over Magdeburg, Germany, our B17-G and another ship in our formation collided.  At the time of the accident our plane was in good condition with nothing more than light flak damage.  As far as I know, all men on board were uninjured.

At the time of the collision, the front section of our nose was carried away, and with it, the nose gunner, S/Sgt Byron L. Atkins.  The plane seemed to be flying straight and level for a very few seconds and then fell off into a spin.  I managed to break out of the right side of the nose just behind the right nose gun.

Floating downward I saw an opened but empty chute.  Leading me to believe that Atkins’ chute was pulled open at the time of the accident or by him later.  However, because of the position of the chute I think the chute must have been opened following a free fall of a few thousand feet and then, because of damage or faulty hook-up, failed to save its occupant.

Following my own free fall, our ship was circling above me.  It was then in a flat spin, burning.  It passed me and disappeared into the clouds below.  When I next saw the ship it was on the ground.  While floating downward, I saw one other chute below me.

I landed a mile or so from the town of Erxleben, Germany…west of Magdeburg.  The plane landed within two or three miles of me.  Many civilians and the military there saw the incident.

To the best of my knowledge, All other five members of the crew were at their positions on the plane and failed to leave the ship.  All were uninjured up till the time of the collision.

In the Casualty Questionnaire section of MACR9366, Hawkins adds that Miller, the tail gunner, rode the tail down some distance following an explosion which severed the tail from the ship.  Miller later bailed out of the tail section.  Also, in the Casualty Questionnaire section, Wilfred Miller adds that he heard through Hawkins that the wing of the other plane knocked Atkins out the nose without his chute.

George Edwin Farrar, my dad, and the only survivor on the Lead Banana in the mid-air collision with the Lazy Daisy on September 28, 1944, wrote what he knew of the accident after he returned home from the war in late 1945.  His account, as follows, is included in MACR9753:

Am very sorry I can’t give more information, but our ship was hit by another B-17 from our group.  The other ship must have hit right in the center of our ship, as we were knocked half in-to.  At the time we were struck I was knocked unconscious, and fell about 25,000 feet, before I knew I was even out of the ship.  Never saw any of the other boys.  I received a little rough treatment from the Germans when I hit the ground, and was unable to tell where I was.

Any information you can find out about the boys I would appreciate hearing very much.

Please pardon this not being typed, but am out of my town, and have tried, with no luck to obtain one (typewriter), but can’t.

May you have luck on the mission of finding what did happen to the boys.

In MACR9366, the Bean crew described enemy opposition as “No enemy Aircraft,” and “Moderate and accurate flak at the target.”

Their description to the extent of damage to the Lazy Daisy was “Aircraft broke up near tail assembly and went down in flames.”

In response to “If aircraft was out of control describe appearance,” they wrote, “Aircraft was burning and slowly spiraling down until it disappeared in the clouds.”

And their response to “Number of parachutes seen” was “None.”

In MACR9753, the Combs crew described enemy opposition as “No enemy Aircraft,” and “Moderate-accurate flak at the target.”

Their description to the extent of damage to the Lead Banana was “Pieces of tail and wings falling off.  Plane in flames from engines.”

In response to “If aircraft was out of control describe appearance,” they wrote, “Going down in flames spinning into the clouds.”

And their response to “Number of parachutes seen” was “None.”

According to the Sortie Report, on Mission 201 to Magdeburg on September 28, 1944, aircraft 42-39888, known as Hot Nuts, “Left formation after target for unknown reasons, but returned to base.”  Flying on Hot Nuts was the William J. Blankenmeyer crew.  Robert H. Obermeyer was the regular navigator for the Blankenmeyer crew, but for some reason, he did not fly on the September 28 mission.

On September 28, Obermeyer was replaced as navigator by Chester A. Rybarczyk, who usually flew with the John Oliver Buslee crew.  It was through this action that Rybarczyk was not on the Lead Banana with the Buslee crew that day, and instead of being a part of the mid-air collision with the Lazy Daisy, was a witness to it instead.

Undoubtedly, the crew aboard Hot Nuts left formation in an attempt to determine the fate of the crews of the Lead Banana and Lazy Daisy, especially the Buslee crew aboard Lead Banana, as Chester Rybarczyk was normally a part of that crew and could have been on that plane if he had not replaced Obermeyer on the Blankenmeyer crew.

Chester Rybarczyk later wrote to George Edwin Farrar’s family, and probably to the families of the other boys in his crew, giving them hope that the boys survived the collision.  Rybarczyk was limited in what information he could divulge, but what he did write contradicted official witness reports in MACR9753, Missing Air Crew Report 9753.

I will publish Rybarczyk’s complete letter dated October 12, 1944 in a future post. 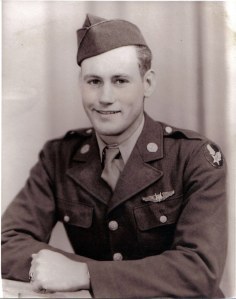 Lenard Leroy Bryant was originally a Waist Gunner on a B-17 G with the Buslee crew.  On the crew’s fourth mission, Bryant became the Engineer/Top Turret Gunner.

Bryant and the Buslee crew were eventually stationed at the Grafton Underwood Airbase with the 8th Air Force, 384th Bomb Group, 544th Bombardment Squadron (Heavy).  Bryant’s first mission was August 4, 1944, and his last was on September 28, 1944.

On the September 28 mission, another 384th plane collided with his plane coming off the target in Magdeburg, Germany.  He was killed along with seven other members of the crew.

Lenard Leroy Bryant is buried in the Netherlands American Cemetery at Margraten, Holland in Plot G, Row 7, Grave 22.  He received an Air Medal with Oak Leaf Cluster for his service in WWII.

George Edwin Farrar was my dad.  He was the Waist Gunner on a B-17G on the Buslee crew.  He enlisted with the Army Air Forces on June 4, 1942 at Fort McPherson (Atlanta), Georgia.

At the time of his enlistment he was 20 years old and was employed as a vending machine repairman.  He had quit school after completing 10th grade to help support the family.  His father, Carroll Johnson Farrar, Sr., was very ill and, being bedridden, could no longer work.

Before becoming part of a B-17 crew, Farrar was an Army Air Forces Gunnery Instructor.  Beginning in May 1943, he instructed military personnel in flexible gunnery for 7 months at Kingman,  Arizona.  In Kingman, he conducted and administered training classes and gunnery tests.

After his stint in Kingman, he administered phase checks, and organized students and instructors for training in aerial gunnery for six months at Ardmore OTU, Oklahoma.  The Ardmore assignment must have started around December 1943 and lasted until May 1944.

Farrar left Ardmore around June 22, 1944, with the crew making several other stops in the states before finally departing the states between June 29 and July 1.

Farrar and the Buslee crew were eventually stationed at the Grafton Underwood Airbase with the 8th Air Force, 384th Bomb Group, 544th Bombardment Squadron (Heavy).  My dad’s first mission was on August 5, 1944 and his last on September 28, 1944.

According to his Separation Qualification Record, Farrar flew as Armorer Gunner in lead ship and was responsible for inspection and repair of bomb racks, gun sights, and turrets.  He fired 50 caliber machine guns from Waist position when in combat.

On the September 28 mission, another 384th plane collided with his plane coming off the target in Magdeburg, Germany.  He was the only survivor on his plane.  He became a prisoner of war, endured the Black March in the winter of 1945, and eventually returned home.

He married Bernice Jane Chase of Meno, Oklahoma, and had two children – me, Cindy Farrar Bryan, and my sister, Nancy Dunlap.

The primary target was the Steelworks Industry in Magdeburg, Germany.

Original Brodie crew Bombardier, William D. Barnes, Jr., last flew with the Brodie crew on September 13, 1944.  Barnes did not fly again until October 17, 1944.  He returned to flight as a Navigator, completed his tour after 35 missions, and returned to the US.

Byron Laverne Atkins flew only six missions, three of them as a Ball Turret Gunner, and one as a Flexible Gunner.  He served as Togglier for the Brodie crew on two occasions – once on September 21 and again on September 28, 1944.

William Edson Taylor, did not fly on the September 28 mission.  On October 5, he flew as Radio Operator/Gunner with the Robert Bruce Birckhead crew.  His aircraft was damaged by flak and crashed near Munchen-Gladbach, Germany (MACR 9754).  Of the crew, four were killed, and five were taken prisoner of war, including Taylor.

Donald William Dooley’s first mission would be his last.  He flew as Radio Operator/Gunner for the Brodie crew.

The Buslee crew flew this mission aboard aircraft 43-37822, named “The Lead Banana.”

The primary target was the Steelworks Industry in Magdeburg, Germany.

Buslee, Albrecht, Peluso, Bryant, and Farrar were the only original Buslee crew members on the aircraft.

William Alvin Henson II replaced Chester Rybarczyk three times on the Buslee crew.  It was Rybarczyk’s lucky day to be flying with the William J. Blankenmeyer crew on aircraft 42-39888, “Hotnuts” on this mission.  Comments were entered on the “Hotnuts” Sortie Report that the ship “Left formation after target for unknown reasons, but returned to base.”  Rybarczyk did witness the crash, as he stated in a letter to Farrar’s mother dated October 13, 1944.  The “unknown reason” was most likely a search for parachutes and survivors after the collision.

Original Bombardier Marvin Fryden was killed on the crew’s second mission on August 5, 1944.  James B. Davis replaced Fryden on the Buslee crew, but for the second time, Robert Sumner Stearns replaced Davis on this mission.  Davis flew as Bombardier on the Raymond J. Gabel crew on aircraft 43-38062, “Pleasure Bent.”

September 28, 2013 is the 69th anniversary of the mid-air collision of the Lazy Daisy and the Lead Banana after coming off a target in Magdeburg, Germany during WWII.  My dad, George Edwin Farrar, was the only survivor from the Lead Banana.  Harry Allen Liniger, George Marshall Hawkins, Jr., and Wilfred Frank Miller survived from the Lazy Daisy.

I salute all these men for their bravery and heroism and the sacrifices they made to defend our freedom.