To review:  The Buslee’s had finally received their son’s ring after a very long wait.  A quest that had begun at the beginning of that year was finally complete.

Mr. B, who had done a great service for the Buslee’s, must not have realized how much the return of their son’s ring must have meant to the them.

First of all, the best wishes and regards. I just don’t know, how to start this letter and how to express our thanks and appreciation for your nice Xmas presents-!!! And I wish, too, if you just know how ashamed we are, because we did not send you the smallest present-!!! Please, dear Mr. and Mrs. Buslee, if you may, forgive us-! Once again thank you so much for me and my wife and PLEASE, Mrs. Buslee, don’t think a minute, you owe me anything-! If you would do that, I would be more ashamed, than I feel now-!!!

We hope, you have had a nice Xmas-of course, we know your sorrow-and we have been talking about you plenty, last two days. When I listen to the radio, to the nice Carrols and to the nice preaching last two days, I just think, how the world would be happy, if all the peoples in all the countries would be like you or Z’s family, families who are thousands of miles away from each other, but those thousands of miles don’t stop the nice feeling for each family. I don’t know, if you will understand that I try to tell you, but the way I mean it is, that over the radio, in the churches, they tell us, to love each other, but how many peoples, how many nations, put this in reality?-!

Once again, Mr. and Mrs. Buslee, PLEASE never thank me again, because, it really was nothing what I did for you, and everybody would do that-! I stop all my mail to Czechoslovakia, because I hate to make somebody unhappy. Everybody in Czechoslovakia, who is writing letters to USA, is considered as a spy and reactionary. One of my friend, who came with Dr. Beneš from England and used to be his bodyguard commander in the Hradcany castle, -he was a Colonel-is now working in mines. He send me a letter through his friend, who is in Austria, that after the Communist took over, they came to his apartment, search everything and found some mail from me, in which I wrote the truth about the new red master. And now they are after my letters and open all my letters. Besides, I am writing anti-communist articles in Czech papers in USA, and they have me marked, and I would not dare, to go and see my dear mother in Czechoslovakia. I know, I never would return-! It is a terrible life in that unhappy country under the red masters. Brother don’t trust his own brother-! It’s an awful life-! God bless our good USA and all the good peoples, because this still is one spot on the earth, where, if we wish, can say, that we don’t like Mr. Truman, or any of his cabinet members. If somebody would say so in my old country, it would mean 10 Years in mines-!

Once again, we thank you so much for your nice presents, and believe me please, how ashamed I am, that I did not remember you-!

Sincerely yours:
Mr. and Mrs. B

Along with the ring, came the knowledge of details of the death of the Buslee’s son, John Oliver (Jay).  That year, 1948, must have been nearly as painful as 1944 and 1945, when Jay’s plane went down and the Buslee’s endured waiting for word and then finally learning of his death.  They could no longer hold their son, but now they could hold his ring. 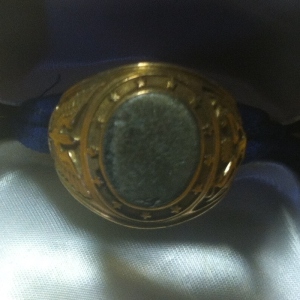 This transcription is a careful reproduction of the original except for occasional spelling and punctuation corrections. Some names have been masked to protect the privacy of those individuals and their families.  In some circumstances, based on relevancy or a desire to mask locations, some material may not have been transcribed.

Thank you to John Dale Kielhofer, John Oliver (Jay) Buslee’s nephew, for sharing these letters with me.