On November 20, 1945, George Edwin Farrar became a member of the Caterpillar Club.  He was granted entry into the club due to the fact that a parachute saved his life on September 28, 1944.  Stanley Switlik, owner of the Switlik Parachute Company sent him this nice letter, certificate, and pin.  I have the certificate hanging in my home.

By now with everything the families of the Buslee crew had all been through together, they considered each other friends.  Not a happy friendship, but one brought together by sadness and loss.  More of a family, really, as their loved ones were as close as brothers as they served their country in WWII.

Raleigh Mae Farrar hadn’t received a letter from one of the crews’ families in many months, but in November 1945, Gerald Andersen’s wife took the time to write.

I have wondered so many times if your son S/Sgt. Geo. Farrar has gotten home after I received word from you that he had been released from prison Camp. I have been so in hopes that he could give us some information.

“The remains of your husband were interred in the United States Military Cemetery at Margraten Holland, Plot R, Row 3 Grave 51. This cemetery is located twelve miles Northwest of Achen, Germany and eight miles Southeast of Maastricht, Holland.”

I do hope your son is in good health. Was he near this Cemetery?

I am trying to contact someone in the Occupational Forces, to visit the cemetery and get pictures of a same.

I am teaching again this year. The time passes and when you are busy you don’t have time to think.

I would appreciate very much to hear from you and to know if your son has come home.

Gerald Andersen has since been reinterred in the Fort McPherson National Cemetery in Maxwell (Lincoln County), Nebraska, Section F, Site 1229. 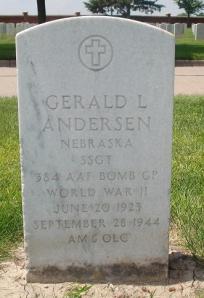 Instructions for Presentation of Claims

On November 15, 1945, just two weeks after George Edwin Farrar’s honorable discharge and separation, the Army’s Claims Division sent him a letter.  It outlined the instructions for reimbursement of personal property losses while in the service as long as the loss was within the regulations.  I wonder if my dad was able to claim the loss of his watch during the prisoners’ march across Germany, which he had to trade for bread.  Do you think trading an item in lieu of starvation was covered in the cited regulations?

Instructions for Presentation of Claims
(AR 25-100)

1. Army Regulations 25-100, 29 May 1945, provide a means whereby reimbursement may be obtained by military personnel and civilian employees of the War Department or of the Army for private property damaged, lost, destroyed, captured or abandoned in the service when the circumstances of the loss are within the purview of the cited regulations. (For further details see AR 25-100, 29 May 1945, obtainable at any post, camp, station or military establishment.)

2. A claim for private property lost in the service should be made on WD Form 30B, 1 June 1945, and submitted to the Commanding Officer of the organization to which the claimant belongs or with which he is serving if practicable, otherwise to the Commanding Officer of any post, camp, station or military establishment, if practicable the one nearest the point where investigation of the facts and circumstances can most conveniently be made. Claims may also be submitted to the Commanding General of any Service Command or any Air Technical Service Command, within the United States, its territories and possessions, or to any office of the Command Claims Service in any Theater of Operations or other command outside the continental limits of the United States. In any case where submission under the foregoing provisions is impracticable claims may be submitted direct to The Judge Advocate General, Washington 25, D. C.

3. Blank forms and assistance in the preparation of a claim may be obtained from the Claims Officer at the post, camp, station or other military establishment where the claim is submitted.