On May 28, 1945, almost four weeks after George Edwin Farrar had been liberated, the Adjutant General sent a telegram to his mother.

The Secrtary of War desires me to inform you your son S/Sgt. Farrar George E returned to military control 8, May 45.

George Edwin Farrar had been liberated on May 2, 1945.  Almost three weeks later he was in France, probably in a hospital receiving medical treatment following his eighty-six day march across Germany, where he and the other prisoners of Stalag Luft IV had come close to starving to death.

Thought I had better drop you a line, as it is taking a little longer to get away from here than I thought, but it won’t be much longer. I feel fine, and will sure be nice to see every-one again. I guess I can tell you a little about my missions now that the war here is over.

I was knocked down on my 16th mission by another plane that ran into the side of us at 30,000 ft. I fell 25,000 ft. before I came to, and pulled my chute; it was a very nice ride. I didn’t think when Bob and I were kids and I told him he would never be a flyer, that some-day I would save my life with a parachute. I guess it was just meant to be that way. I was the only man to live from my crew and we were flying lead ship of that Gp. [group].

Our bombardier was killed on our first mission when we brought a ship back from Hanover with 106 holes, and only one engine going. We crashed landed on the English coast. We had several other rough mission, but those were the worse.

By the way my last mission was at Magdeburg. When I hit the ground I received a little rough treatment from the Germans, but I expected it. I was in three German Hospitals for about two and a half months, but am in perfect shape now, that is as perfect as I ever was.

We have been on the road marching since Feb. 6 and a lot of nights had to sleep in the open. Well I guess that will be enough of my history until I get home on furlough.

I just hope now that I will find every-one at home feeling fine, as I pray you will be every night. Even on the march, at night when we reached a barn at night I didn’t care how rough it had been that day or how rough it would be without food the next. The main thing that kept me going was the thought that some day I may have the chance to make you just a bit more happy, and that has been my thought ever since the day I was knocked down, and had hours to do nothing but think and look at fence.

I had better cut this as it is getting late and the lights here are very poor. And if I expect to do any more flying I had better take good care of them (my eyes). Tell every-one hello, and I will see you soon. I guess my boy will be on vacation when I get there. We should have a pretty good time in 60 days – and I have $1,000.00 back pay coming.

Love to all,
Ed

Farrar did not have a chance to mail his letter for a week and wrote a few more words before sending it.

I had this letter with me for seven days, and am just getting a chance to mail it. I have been in France for little over a week, and am going to England before I come to the States. I may get a chance to fly home from there. But I do know that I will see you soon, and that is the main thing that counts. Tell Dad to stay in good shape so we can make the rounds, as we did last time. One thing I’m going to stay at home more this time.

On May 18, 1945, the Army Effects Bureau sent a letter to George Edwin Farrar’s mother regarding the disposition of his personal effects.  The tone of the letter implied that it was a second request for information as to how to dispose of Farrar’s personal property that was still in the hands of the military.  I wonder where these items had been stored since Farrar had been reported missing since September 28, 1944.  I don’t have any record of the initial request.

Reference is made to letter of the Army Effects Bureau dated April 19, requesting information to enable disposal of property belonging to your son, Staff Sgt. George E. Farrar.

I shall appreciate a reply at your earliest convenience, in order that the property in our custody may be released to the proper person without further delay.

For your use in replying, there is inclosed an addressed envelope which needs no postage.

Life Was a Bit Hard

Four days after he was liberated, but still in Germany, George Edwin Farrar wrote a longer letter to his mother.

I guess you have heard through the government that I was liberated. I was liberated by the English May 2nd and have been treated very nice since. I should be home soon, and having some of the nice meals you fix. That I have dreamed of for all-most a year. Life was a bit hard here, but it is all over now. I have been on the road marching since Feb. 6th with very little food, but am not in bad condition. I hope that every-one at home are o.k. as I have been thinking of every-one each day. Tell Gene I hope he had a nice birthday, and I was thinking of him on that day.

I’ll sure have a lot of things to tell you when I get home, and I am really going to stay around home. I guess I’ll have to get a new watch when I return as I had to sell mine for bread when I was on the march.

I hope you can read this, as I am writing on an old German gas mask case, and it is a bit rough, so will close until I have a better chance to write.

Love to all,
Ed

Gene was Ed’s youngest brother who had just turned fourteen on March 4.

George Edwin Farrar , my dad, was liberated on May 2, 1945. He was sent to Brussels, Belgium and on to a hospital in France where he spent several weeks.

He was allowed to pen a short note home to inform his family he had been freed. 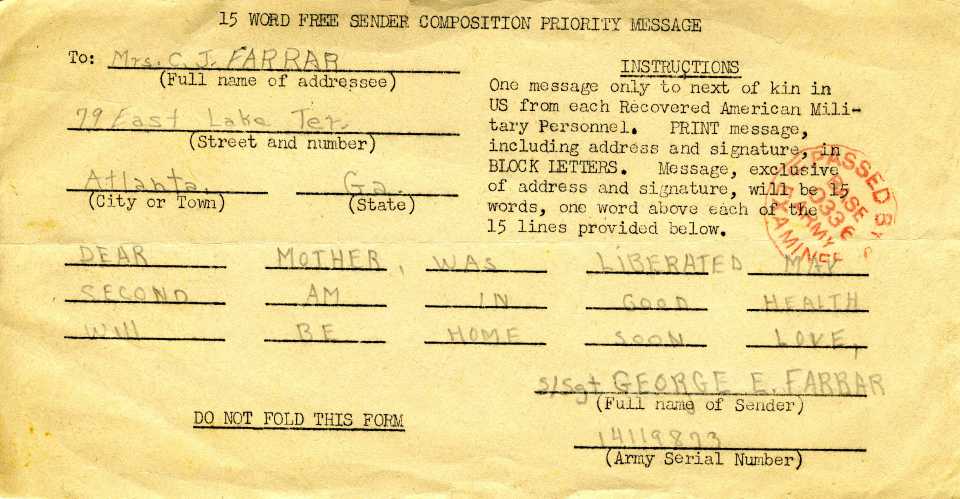 Dear Mother, was liberated May Second.  Am in good health.  Will be home soon.  Love, S/Sgt. George E. Farrar