On February 1, 1945, William Alvin Henson’s wife, Harriet, wrote a sympathy letter to John Oliver (Jay) Buslee’s mother.  The Buslees had just learned on January 28 that their son had been killed on September 28, 1944 in the same mid-air collision between Lead Banana and Lazy Daisy that claimed the life of William Henson.  Harriet had learned of her husband’s fate just two days before Christmas.  It was her infant daughter’s first Christmas, a holiday she would never be able to celebrate with her father.

I am so sorry that I have to write this letter. I had prayed that I wouldn’t, because, to say the least, it isn’t very pleasant.

Mrs. Buslee, to say I am sorry is trite, but I really am sorry. To lose a son is different from losing a husband (presuming that we have), and since I have my little girl I feel that I can sympathize with you more, because I just don’t know what I would do if something happened to her.

It isn’t human nature to give up hope. So please don’t, I haven’t. I asked God to bring Bill back to me and I believe He will. Bill has to come back and see his little girl.

Give my best regards to Mr. Buslee and your daughter, and know that I am thinking about you. I feel so close to you even though I do not know you. Maybe when Jay and Bill get back, we can all get together and have a gay time.

Thank you to John Dale Kielhofer, nephew of John Oliver (Jay) Buslee, for sharing this letter from Harriet Henson to his grandmother.

Map of Prisoner of War Camps in Germany

With her son a prisoner of war of the Germans, Raleigh Mae Farrar received the monthly Prisoners of War Bulletin.  As stated in the mast head, the bulletin was published by the American National Red Cross for the Relatives of American Prisoners of War and Civilian Internees.  The February 1945 edition included a map of prison camps. 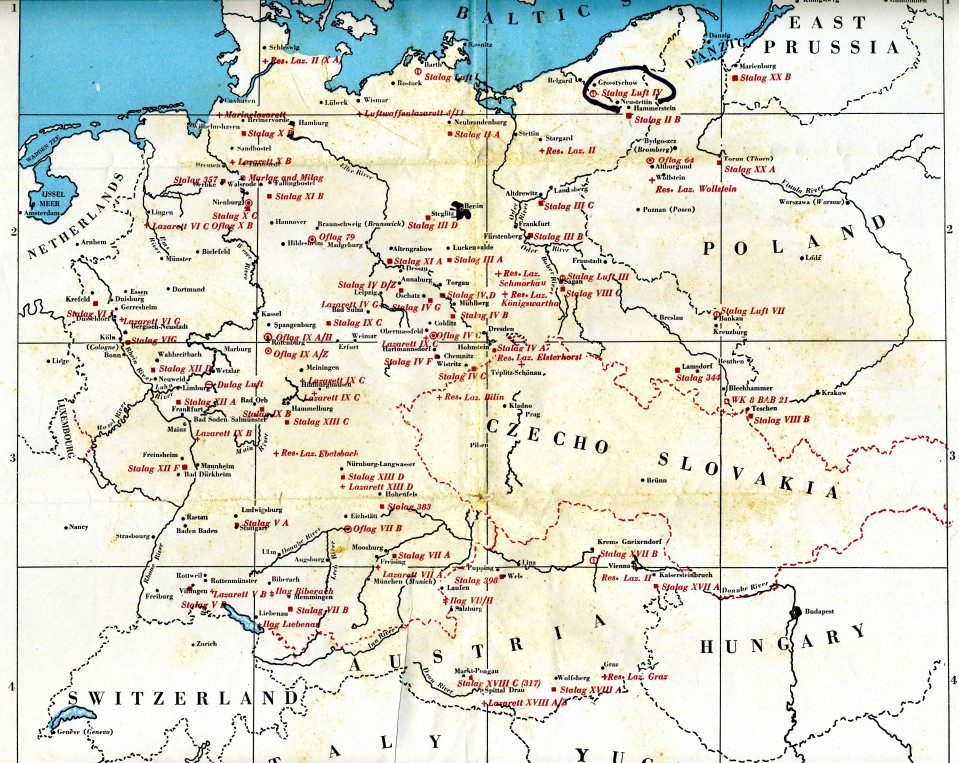 Raleigh Mae circled Stalag Luft IV where her son, George Edwin Farrar of the John Oliver Buslee crew, was being held.  Also held at Stalag Luft IV were Harry Allen Liniger and Wilfred Frank Miller of the James Brodie crew.  George Marshall Hawkins, Jr, navigator of the Brodie crew was held some distance away to the southwest at the Obermassfeld Hospital which served Stalag 9-C.

The February 1945 issue of the Prisoners of War Bulletin also noted that Russian advances in January were bringing many changes in the camps, with the expectation that men held in the camps would be moved to stay ahead of the Russian advances.  The Soviet Red Army crossed the Oder River into Germany and reached within fifty miles of Berlin.

In a section of the bulletin named Camp Movements, the following information was reported:

Grosstychow, in Pomerania, where Stalag Luft IV with its large complement of British and American airmen was located, was close to the combat zone in late January.

Also a blow to the Germans, earlier in January the Germans had withdrawn from the Ardennes, giving the Allies the victory in the month-long Battle of the Bulge on January 25.