A Letter from Aunt Will

Willie Brent Farrar Burnham, better known as Aunt Will, wrote a letter to her nephew, George Edwin Farrar, addressing it to Stalag Luft IV.  She, too, was unaware that the prisoners were no longer held in the camp.  Aunt Will didn’t date her letter, but it was postmarked in New York on February 16, 1945, so she probably mailed it around February 13.  Her letter was also marked “RETURNED TO SENDER By Direction of the War Department. Undeliverable as Addressed.”

Was glad to hear from Raleigh giving me your address. Missed seeing you when I was in Atlanta, found all looking well. Beverly has grown to be quite a big girl and is very pretty. Fell in love with Dot’s twins, they are precious and into everything. She has darling children. Your Dad is doing nicely and seemed to enjoy my visit. Raleigh also. If you come through Charleston on your way home be sure to call us up and pay us a visit, we are listed in the phone book.

I would hardly have known Gene and Martha they have grown so. I think Gene looks like you.

Aunt Daisy, Katie and Uncle Arthur all send love. Would love to send you a box if possible. Let me know if I can. I can’t get cigaretts.

Lots of love from all,

In early January 1945, the Soviet Red Army invaded Nazi-occupied Poland, sending the Germans into a retreat.  On January 17, the Soviets captured Warsaw, which was about three hundred miles from Stalag Luft IV in Gross Tychow, Pomerania (now Tychowo, Poland).  George Edwin Farrar, Wilfred Frank Miller, and Harry Allen Liniger were all prisoners of the Germans and were all held at Stalag Luft IV.

On January 18, the Farrar family had received their son’s first letter home from prison camp.  He had written it on October 24, 1944.  I’ll re-publish his letter here.  George Edwin Farrar wrote:

Dearest Mother:  I find it rather hard to write even a letter as small as this.  Of course, we can’t say much, but are being treated O.K.  We have plenty books and I spend most of my time reading.  I hope you will have plenty chicken when I get there.  I think I could eat a couple all alone.  I guess Gene is doing good in school by now.  Tell him to study hard, and make good grades.  How is Martha getting along with her new job.  I hope she likes it.  I’ll bet by now she is having a hard time with her boyfriends.  I wish you would send me some candy.  Be sure it is something that will keep until it gets here, because it is a long trip.  I’ll make up for these letters when I get home.  Love to all, George

The next day, Raleigh Mae Farrar wrote back to her son:

We were so happy to get your letter yesterday. Do write as often as possible for its so good to hear from you.

I mailed you a box and sent in order for cigaretts. If you need clothes let me know. I can send them. Things here at home are just about the same. Dad doesn’t improve. Gene is taller than I now, and is doing good in school. Gene and I will start our garden and chickens soon. Dot and kids are doing pretty good. Demmey will go to first grade, so Dot feels like he is really growing up. Beverly is as pretty as ever. She had flu and its taking a long time to get rid of it. I will be on the look out for some good candy and as I know now what I can send, I will be ready when my next labels come. I do hope you get the box. We all love you and hope and pray you will get along good. I will try to send some books.

Be good and write.

Lots and Lots of Love,
Mother

Raleigh Mae Farrar’s letter would never be received by her son in Stalag Luft IV.  By the time it would arrive, Stalag Luft IV was empty of prisoners.  The letter was marked “RETURNED TO SENDER By Direction of the War Department.  Undeliverable as Addressed.”  The date she got the letter back is unknown.

Farrar Family Reacts to the News

George Edwin Farrar, my dad, was born in 1921 and was the middle child in a family of nine children.  His mother was Raleigh Mae George Farrar and his dad was Carroll Johnson Farrar, Sr.  The ages of the Farrar children spanned twenty-seven years, from Geraldine born in 1910, to Beverly born in 1937.

Geraldine was eleven years older than my dad and was called “Gerry.”  A photo of Gerry and my dad as a child: 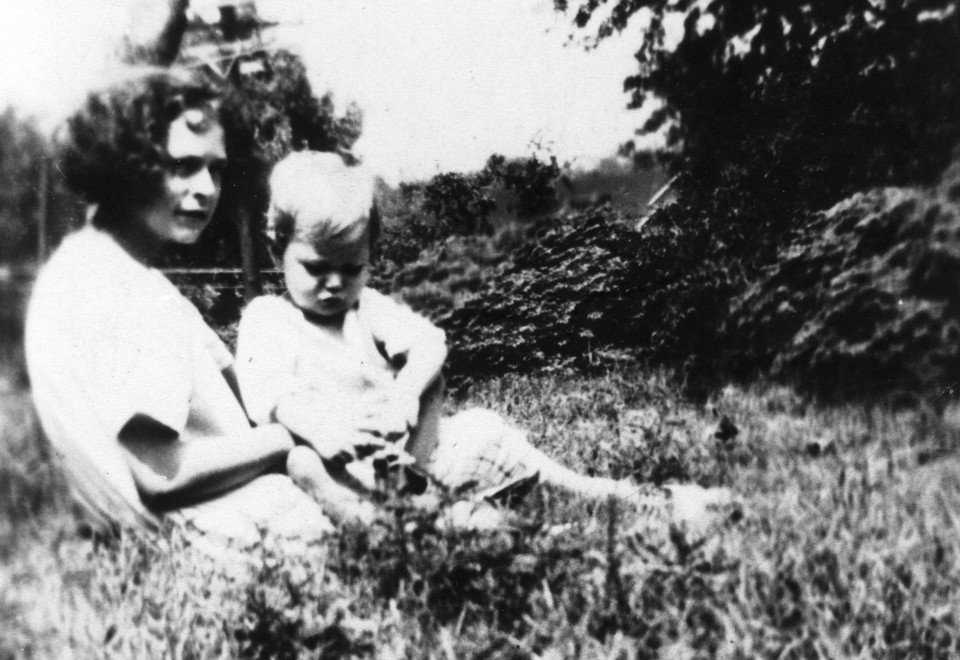 By 1944 Gerry was married to Wallace “Wally” Mass and living in Susanville, California.  On October 15, 1944, she sent this telegram home after hearing the news of my dad being missing in action:

And finally, a photo of my dad and his mother when he was home on leave earlier in his service: