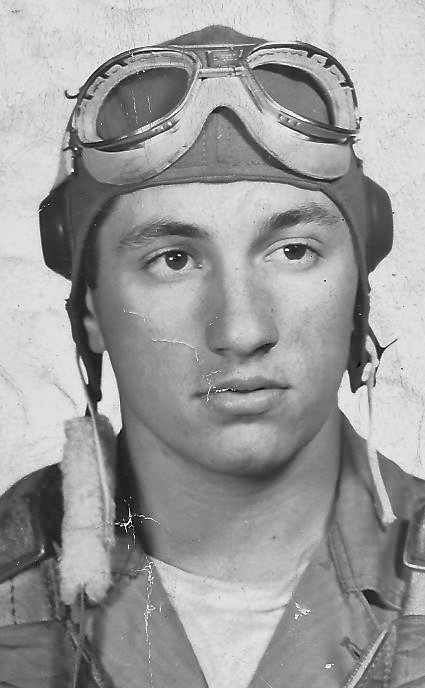 A new search, and additional information from his son, Harry, Jr., have provided me with some new information regarding Harry Allen Liniger, waist gunner of the James Joseph Brodie crew of the 545th Bomb Squadron of the 384th Bomb Group of the 8th Army Air Forces in WWII. He was an original member of the Brodie crew and was one of the three survivors on Brodie’s B-17 in the mid-air collision on the 28 September 1944 mission to Magdeburg.

To view my original post and other information about Harry Allen Liniger, please see the links at the end of this post.

Because I have so much new information to share after my latest research into Harry Allen Liniger, this update will be presented in multiple parts. First up, some background about the Liniger family.

Harry first appears in the Federal Census in 1930 as a 5-year-old. He, his parents, and sister (all listed with the last name misspelled “Lianeger” and with his sister’s name misspelled “Oleen”), lived in Lynnhaven, Princess Anne County, Virginia. Paul was the Head of Household and 41 years old. Also included in the Liniger’s household were Estella (wife, age 36), Eileen (daughter, age 14), and Harry (son, age 5).

Also living in the Liniger household were Paul’s brother Harry A. (age 43), sister Mary (age 45), and two lodgers, Conard Ginon (age 32) and Parker Westly (age 22). Other than the two lodgers, all were recorded as born in Ohio. All, including the Liniger’s children Eileen and Harry, were recorded with the occupation of Showman or Show woman in a Traveling Circus. 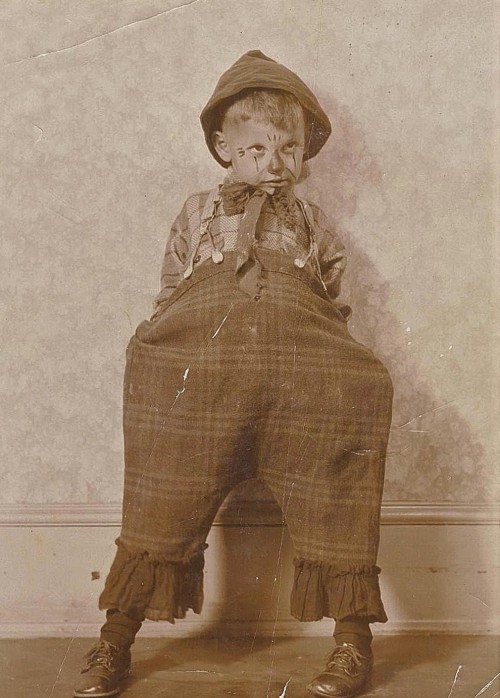 Going back twenty years, and two years before he and Estella married, Paul Liniger (misspelled Linneger, age 20), is recorded in the 1910 Federal Census as living in Pultney Township, Belmont County, Ohio with his father John (age 56, occupation – engineer on a ferry boat), his mother Sarah (age 46, no occupation), and brother Harry (age 23). Both Paul and Harry were listed with the occupation of Acrobat in the Circus. [Note: John Liniger is recorded under the name “William Liniger” on the 1900 Federal Census].

Beginning a career in the circus at least as far back as 1910 with the Liniger brothers in their early twenties, they went on to have their own show and eventually their own circus.

In 1916, the “Liniger Bros. & O’Wesney Shows” was described as a new show in the amusement world that was destined to be a big success. The staff was identified as Paul Liniger (manager), Ray Owesney (secretary-treasurer), and Harry Liniger (equestrian director), among others. Also of note was the comment that “Friends of Mr. and Mrs. Paul Liniger will learn with delight that the stork paid them a visit on May 11 and left a ten-pound baby girl. [Billboard, May 20, 1916, p. 62, Classic Circus History – Liniger Brothers.] 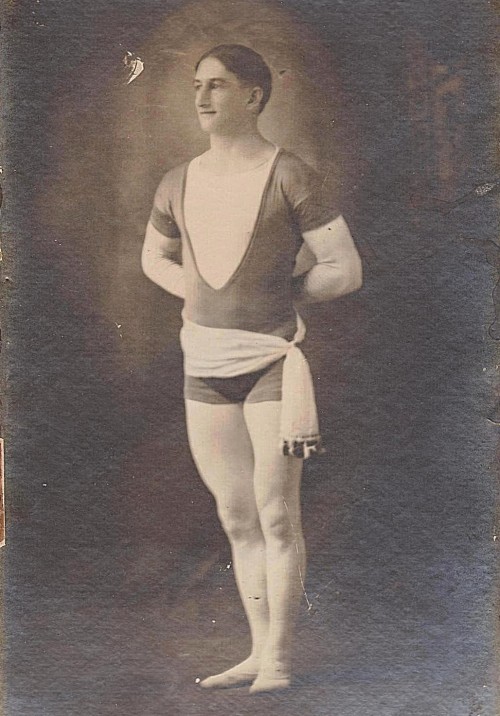 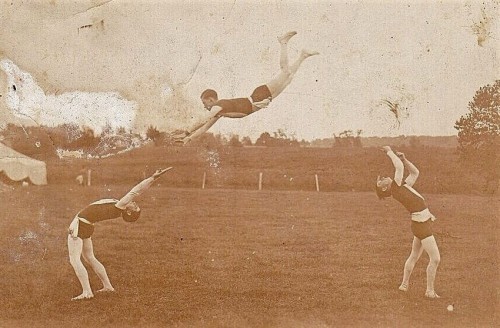 In 1918, the show did not go on, “Owing to the fact that Harry Liniger, of the Liniger Bros. Shows, has been drafted and is somewhere in France, the show did not take the road this season.” [Billboard, August 10, 1918, p. 24, Classic Circus History – Liniger Brothers.]

In a 1920 entry found on the Classic Circus History website of the Circus Historical Society, in the Billboard Excerpts 1920 – 1922, Harry was described as having been a clown in the A.E.F. (American Expeditionary Forces). Harry served in WWI, enlisting on 27 May 1918.

According to the Ohio Roster of Soldiers, Sailors, and Marines in WWI, Harry spent part of his military service in WWI in the American Expeditionary Forces (A.E.F.), from 22 July 1918 to 23 February 1919. The Showman certainly took his show on the road in World War I! Harry’s military service release date, when he received an honorable discharge, was on 6 May 1919. [Read more about this aspect of the A.E.F. on The World War History and Art Museum website, “The Circus Goes to War – Show Business and the Armed Forces of World War I.”] 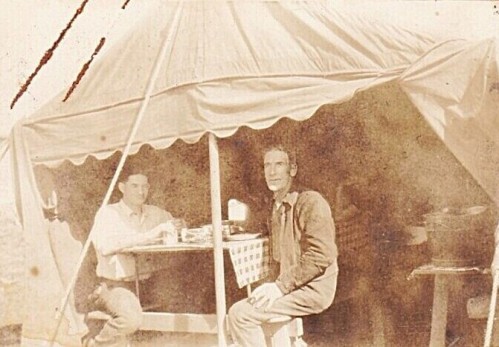 Harry Liniger of the Liniger Brothers Circus on the left, unidentified on the right
Photo courtesy of his great-nephew Harry Allen Liniger, Jr.

I did not find a 1920 Federal Census record for the Liniger’s, but I found another record of their involvement in the circus during the 1920’s on the Classic Circus History website of the Circus Historical Society. The Billboard Excerpts 1920 – 1922 notes that the brothers performed as the “Liniger Brothers” in the circus in that timeframe.

In 1921, Paul and Harry were with the Rhoda Royal show, “one on the sailor rope and the other in clown alley,” and in a later article, Harry Liniger wrote that he left the Rhoda Royal Circus, and the “Liniger Bros. will be out next spring with their own vaudeville and picture show under canvas.” [Billboard Excerpts 1920 – 1922] 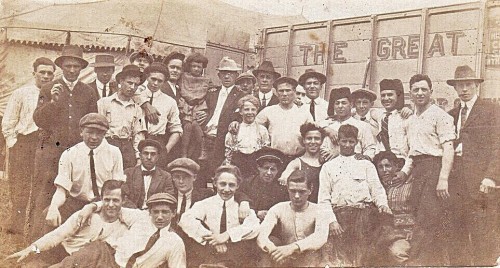 For 1925, the only archive record I find online is this archive from Circus World. It is an Archive Record Herald. A herald is a circus advertisement that was similar to a hand bill. Below is the header for the Liniger Bros.’ herald.

Please check the Archive Record Herald link for images of the herald itself, both Side A –“WATER-PROOF TENTS” and Side B –“CASTLE’S CONGRESS OF ANIMAL ACTORS.” Among the “notable acts” are the “3 Liniger Brothers.”

After 1925, I know the show went on because the Liniger’s were recorded in the 1930 census with the occupations of Showman and Show woman in a traveling circus, but I find no other mentions of the Liniger Brothers in internet searches after this year. To learn more about the American circuses of this era, I may have to visit the Showmen’s Museum just south of Tampa, Florida.

The Showmen’s Museum is described as “Unlike other museums, the Showmen’s Museum houses decades of memories and history of carnivals and circuses of the past. Guests can stroll the 54,000-square-foot property and view the many artifacts, photographs and relics of the past.” Check their website for hours and ticket prices. 6938 Riverview Dr., Riverview, FL  33578, (813) 671-3503.

But I need to back up one year for a notable event in 1924. In 1924, the Liniger family grew by one. When Paul and Estella’s son was born in 1924, Paul named him for his brother – Harry Allen Liniger. The future 384th Bomb Group waist gunner grew up in a circus family whose many acts included everything from clowning to acrobatics and more. But for all the shows the Liniger’s performed, Paul’s son Harry would perform the most death defying act of any of them.

As a waist gunner on a B-17 heavy bomber, Harry celebrated his twentieth birthday on 9 August 1944 participating in his third combat mission of World War II. He risked his life on a total of sixteen combat missions, avoiding injury from enemy fighters and the ground fire of the German flak guns, until seven weeks after that birthday mission. On 28 September 1944, after his bomber and another of the 384th collided 25,000 feet above Madgeburg, Germany, Harry was propelled from the B-17 in an explosion that threw him from the ship.

If Harry had any flashbacks from his family’s circus days, he may have felt like he had been shot out of a cannon and was flying through the air, but not with the greatest of ease, no trapeze, and without a net to catch him and break his fall. Fortunately for Harry, his chest chute functioned properly and delivered him safely to the ground, although the “safely” part ended rather abruptly when he was taken into custody as a prisoner of war upon landing.

The World War History and Art Museum website, page “The Circus Goes to War – Show Business and the Armed Forces of World War I.”