John DeFrancesco in the News 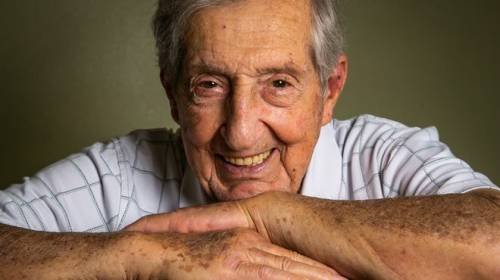 Well, he’s done it again. My friend and fellow Ocala resident, John DeFrancesco, has made the local paper – again. And, not only is John the subject of a great article in the Ocala StarBanner by Andy Fillmore, with photos by Doug Engle, John made the front page of said newspaper. 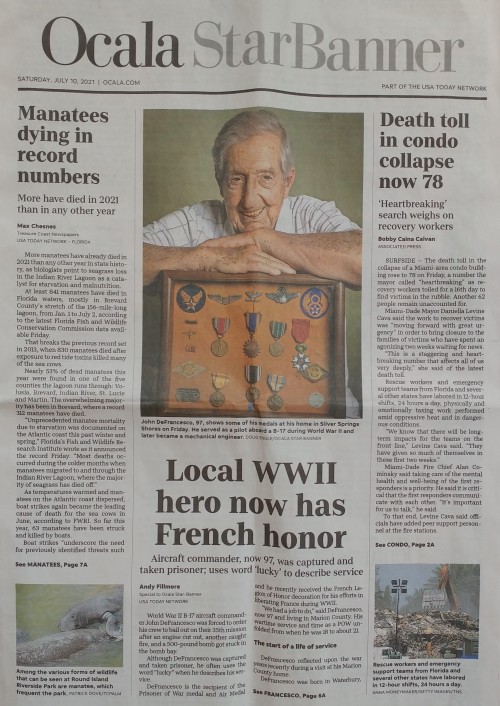 John was a B-17 pilot during WWII and served with the 384th Bomb Group of the 8th Army Air Forces, the same group in which my dad, George Edwin Farrar, served, although at a different time.

The entire article can be read online on the paper’s website.

John’s reaction to making the front page of his local newspaper. “Wow!”

I have to agree. Wow! Thank you, Andy, for the awesome article, and thank you, Doug, for the excellent photos.

A follow-up to John’s article…

After John’s article appeared in our Ocala newspaper, I had a phone call from a 90-year-old woman named Myrna. Myrna lives in Ocala, and after reading the article in the paper, was interested in talking to John (yes, I have passed the message along to him).

From 1953 to 1954, Myrna and her late husband lived in Moosburg, the German town where John’s WWII POW camp was located (Stalag VII-A was actually located just north of the town of Moosburg).

Myrna’s husband was stationed in Moosburg for the US military. They resided in military housing, an apartment in a building divided into two apartments. Myrna said that during WWII, the building had been a Nazi headquarters.