Harry Allen Liniger was a waist gunner with the 384th Bomb Group in WWII and was on the B-17 42-31222 Lazy Daisy on September 28, 1944 when it, carrying Harry and the James Brodie crew, suffered a mid-air collision over Magdeburg, Germany with my father’s unnamed B-17 43-37822. Both Harry and my dad, along with two other crew members on the Lazy Daisy, survived. The other fourteen airmen aboard the two fortresses were killed.

Recently, I have been looking into the pre-combat/training phase of the men who transferred into combat at the same time as my dad, George Edwin Farrar. I have traced their path to the European Theatre of Operations (the ETO) through my dad’s letters home and through fellow 384th Bomb Group service member Frank Furiga’s diary. And recently Harry Liniger’s son, Harry Liniger, Jr., shared a few letters with me that his father wrote to his future bride during his pre-combat military training in the United States.

But Harry’s letters start earlier than combat crew training, at the time he was in Radio School at Scott Field, Illinois, and during Gunnery School in Harlingen, Texas. I’m sharing, with Harry’s son’s permission, excerpts from those letters to illustrate the intensity of military training before the airmen of WWII were ready to go into combat, and to show the emotional toll inflicted from being away from home and family and other loved ones while these young men were preparing for a war from which they were unsure of their return. 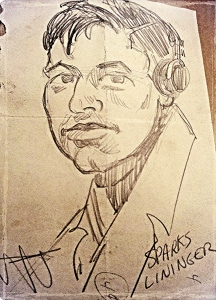 On 29 August 1943, future 384th Bomb Group waist gunner Harry Liniger was a PFC in Radio School at Scott Field, Illinois. I know this because a letter he wrote to his future wife, Miss Carrie Belle Carter of Hilton Village, Virginia, was mailed on this day from Belleville, Illinois with his return address of Barracks 797 of the Army Air Forces 30th Technical School Squadron at Scott Field.

Scott Field is now known as Scott Air Force Base and is about seventeen miles east-southeast of St. Louis, Missouri. During WWII, training skilled radio operators and maintainers was the primary wartime mission of Scott Field.

In his letter, Harry described the area around the base as “Nothing but Cocktail Lounges and Bars. Ever other building.” But, he said, “I never frequent those disreputable haunts. I try to be a model soldier which at times seems to be rather foolish, but just the same, I keep my head high and go on.”

Like most of the boys in the service, Harry was homesick for familiar places and faces and said, “I like this place swell. The only thing I dislike about it is it’s so damn far from home and I won’t get a chance to get there.”

Radio school was pretty tough and required a lot of work from serious students and not much time for anything else. Fellow 384th Bomb Group airman Lenard Bryant, a waist gunner (and later top turret gunner) and crewmate of my dad, also had a tough time at radio school and wrote home once that “I don’t think me and radio is getting along too well together.” He later wrote, “I washed out today.  I will go to gunnery school when I ship out of here…”

On 18 September 1943, Harry wrote to Carrie again from radio school at the same station.

In the letter, Harry related that he had been on a B-24 mission over the Gulf. I assume Harry meant that he was doing some airborne training over the Gulf of Mexico as by late 1943, students of the Radio School at Scott Field were in the air practicing code transmission under actual flight conditions.

On 25 September 1943, Harry wrote to Carrie, again from Radio School at Scott Field.

In this letter he didn’t talk much about his training. He was more concerned about trying to keep his relationship with Carrie going through the mail as I’m sure was the concern of many servicemen far from home in wartime.

On 5 February 1944, Harry wrote to Carrie, this time from the Student Reception Pool at H.A.A.F. (Harlingen Army Air Field), Harlingen, Texas. Harry was at Army Gunnery School. I suppose, like Lenard Bryant, Harry and Radio School hadn’t gotten along too well together.

Believe me, my life has changed, I am working harder than I ever thought I would. Right now I am taking advanced Gunnery. I will go to P.O.E. from here. I am getting a ten day furlough before I go over. I will be home in about 2 months. I am looking forward to seeing you. There are some things I would like to tell you someday.

On 16 May 1944, Harry wrote to Carrie from Combat Crew Detachment at Ardmore Army Air Field in Ardmore, Oklahoma.

While I haven’t included many of the more personal aspects of Harry’s letters to Carrie up to this point, it is clear to me that his love for her had been growing over his period of stateside training, while he was preparing to go to war. Although he was able to enjoy a few in-person visits during furloughs, Harry and Carrie were able to continue their relationship mainly through their letters to each other.

In this letter, now that his transfer into combat was fast approaching, Harry shared with Carrie the rigors of the training involved, the reality of entering combat, and thoughts of his own mortality.

Your sweet and most welcome letters have been coming daily; or almost daily. I sure do appreciate you writing so often. It seems to give me a “lift.” I try to answer as many of them as I possibly can. I hope you will try to understand when my letters are few and far between. I fly all day and go to school all night and I am so damn tired when I get back to the barracks I can’t seem to do anything but flop on my “sack” (bed).

In regards to my meeting you someplace I don’t think it will be possible for me to get any days off. I can get out almost every night if I pass all my subjects. And I think if seeing you were my reward I could pass anything. If you could only come out here. But that would be asking too much. I love you even though I may never see you again.

I will have to close for now darling. “I love you.”

A week later, on 22 May, 1944, again writing from Ardmore, Harry expressed his deep appreciation for all of the letters Carrie had written him, telling her,

You will never know how important mail is to a guy who is away from home, and being in the army makes him appreciate it even more. But the main thing is when you hear from someone you care for as much as I care for you. I really love you. I love you more than anyone or anything else in the world.

On the way to the ETO

The date of Harry’s letter coincides with a letter written by my dad to his mother, and a diary entry of fellow 384th service member Frank Furiga, putting them all in Kearney at the same time, picking up the B-17’s they would ferry to the European Theater of Operations.

According to Frank Furiga’s diary entries, they left Kearney the next day, on 29 June 1944. (Use the link below in the Sources section to follow the trail to the ETO of Liniger, Farrar, Furiga, and the rest of the servicemen in their crossing group).

On this date, Harry wrote,

My last letter in the States. I don’t know where the next one will be from but I will write to you as soon as I reach my destination. Your letters will be cherished more now than they ever were, and they were always more important than anything else.

I sure would like to open one and find you there. I am afraid my love for you is growing day by day now that I know I am not going to be able to see you.

I don’t have a date for the last of Harry’s letters that his son shared with me, but in it he gave Carrie an A.P.O. address care of the Postmaster in New York City. He may still have been in combat crew training in the States or he may have been overseas at this point.

In addition to Harry professing his deep love for Carrie with,

I love you more and more each day.

I don’t think I could possibly love you more than I already do.

Harry wrote about a landing accident, but also spoke as though he had not reached combat duty yet.

Nothing new except we had a plane make a belly landing the other day. No one was hurt. One of the guys had a nervous breakdown after the crash.

You would be surprised at the number of guys in a crew like this who go to pieces before they reach combat.

Training missions had their risks, but they were nothing like what the airmen would face in combat. Those men who could summon the courage to fly combat missions against their enemies faced brutal cold and lack of oxygen in the high altitude flying of unpressurized bombers, necessitating heated flying suits and an oxygen system to survive. Over enemy territory, they faced German fighters and flak from the ground guns.

Harry endured all of these challenges and horrors, a true assault on the senses, mission after mission, climbing right back in the B-17 day after day sixteen times. He didn’t break down. He didn’t go to pieces.

During the time Harry Liniger served his combat duty in the Army Air Forces, a combat tour with the 8th Air Force consisted of thirty-five missions. He had made it almost halfway through earning his ticket home, until the mid-air collision of 28 September 1944 ended Harry’s duty as an airman in combat.

What Harry had seen up to this point serving as a waist gunner on a B-17, with flak bursting around him, attacks from German fighters, watching nearby fortresses exploding and plummeting to the ground, counting parachutes coming out of those planes as they went down, was only the beginning of the horrors of war for Harry.

Nothing could prepare one captured by the Nazis physically or mentally for what came next. Harry needed to survive over four months starving in a prison camp and another eighty-six days with little food and water on a march of over five hundred miles across Germany before he would gain his liberation and freedom.

Harry’s son also shared with me a photo of his dad’s Guardian Angel, who apparently did a fine job protecting Harry while he served his country – in his training in the States, in his overseas combat, and during his POW experience. Harry Liniger was one of the lucky ones to return home.

Harry survived it all and returned home during the summer of 1945 to marry the girl he exchanged letters with, the girl he fell in love with and who fell in love with him during such a dark time in our American history. Harry arrived back in the States on 9 June 1945 and he and Carrie Belle Carter married a little over a month later on 26 July.

Harry Allen and Carrie Belle Carter Liniger on the far right, in Miami Beach just after their marriage

Thank you, Harry Liniger, Jr., for sharing photos, letters, and stories of your dad from WWII.

Frank Furiga Diary Entries Trace the Crossing to the ETO