A couple of years ago, I published the above photo and wrote about the Farrar family in 1941. My dad, George Edwin Farrar, is standing on the far left.

I asked for help in identifying family friend Ozzie Couch, but did not turn up any leads. Still curious about this man who was apparently important enough to the family to earn a place in their family photo, I kept searching.

I just recently found Ozzie, or at least who Ozzie was, because I found that he’s been gone since 1984.

My dad’s youngest sister, my Aunt Beverly, is the one who identified him by name and told me a few things about him. Among those, Ozzie and Carroll Jr. (the Farrar’s oldest son) both worked at Rich’s Department Store in Atlanta, Georgia. Beverly remembered that Ozzie brought many gifts to the family including a variety of plants, Beverly’s first Persian cat, and a retired circus horse named Danny Boy that lived for a time in the garage. Ozzie was from North or South Carolina and served in WWII.

Unsure of the spelling of Ozzie’s last name (I had never seen it in writing), and wondering what formal name “Ozzie” stood for, I searched mainly for the first name “Oswald” and as many spelling variations of the last name “Couch” as I could think of. Google had a habit of showing me pictures of sofas when I Googled his last name with the spelling “Couch.”

I finally settled on searching Ancestry.com using his nickname “Ozzie Couch” and a birth year of 1915, thinking he was probably close in age to his friend Carroll, Jr. (who was born in 1916). I don’t know how, but after many unsuccessful searches, Ancestry finally turned up an “Osier Couch” in the 1942 Atlanta City Directory. The database actually contained a typo as he was listed in the directory with the correct spelling of his name “Osler.” I guess “Osler” preferred the nickname “Ozzie.”

Surprised as I was to finally find him, the bigger surprise was that his residence address in 1942 was listed as 79 E Lake Ter SE (East Lake Terrace), the Farrar family home. Along with parents Carroll Sr. and Raleigh, living in the home in 1942 were also G Edwin (my dad) and Robt B (Bob). I assume the younger children weren’t listed because of their ages. Carroll Jr. was not living there at the time as he had enlisted in WWII in 1941. Ozzie’s occupation was listed as Assistant Warden.

Once I had found Ozzie on Ancestry, census and other records revealed more information about him. I found that Ozzie was the oldest of the seven children of Dudley Spiegal (1890 – 1960) and Leila Ellison (1890 – 1975) Couch. Ozzie had five brothers and one sister. His parents and all the children were born in South Carolina.

In 1920, the family lived on a farm on North A Street in Easley, Pickens County, South Carolina. Ozzie’s father’s occupation was butcher. In 1930, his father had turned to the dairy business and his occupation was listed as dairyman of his own dairy.

In 1940, Ozzie was no longer living at home in Easley. When Ozzie filled out his military draft card on October 16, 1940, he listed his residence as 1428 Peachtree Street, NE, Atlanta, Fulton County, Georgia. According to that record, he was 5′ 10 1/2″ tall, weighed 157 pounds, had blue eyes, blonde hair, and a light complexion. The record also noted he was 29 years old, born on December 28, 1910 in Easley, South Carolina. His employer was the U.S. Penitentiary in Atlanta, Fulton County, Georgia. He listed his father, D.S. Couch living on North A Street in Easley, Pickens County, South Carolina as the person who would always know his address.

Ozzie’s friend, Carroll Farrar Jr., enlisted in the U.S. Army Air Corps on August 13, 1941. Ozzie enlisted in the Army the next year, on February 26, 1942, at Fort McPherson in Atlanta, Georgia. Even though the Atlanta City Directory showed him living on East Lake Terrace in 1942, Ozzie listed his residence as Pickens County, South Carolina on his enlistment record. He listed his education as four years of college.

I found a photo of Ozzie on Ancestry identified as obtained from the Fold3 website, with the original source being the 1943 WWII Yearbook of the Ninth Academic Group of Gulfport Field, Mississippi.

In the Gulfport yearbook, he was identified as a Second Lieutenant, Assistant Post Classification Officer. The yearbook describes the school as a technical school or more formally as the Army Air Forces Eastern Technical Training Command at Gulfport Field, Mississippi. I have been unable to determine how Ozzie spent the entirety of his WWII service other than that he was in the US Army Air Forces.

Aside from the war years, several years of Atlanta City Directory searches, both before and after his WWII service, resulted in Ozzie being listed as a warden or working at the Atlanta prison, or as a clerk, location unknown, but perhaps the location was Rich’s department store in downtown Atlanta where Carroll Jr. worked for a time.

I found Ozzie in a few more photos in the family photo collection, one with his friend, my uncle, Carroll Farrar, Jr.,

And one in uniform, 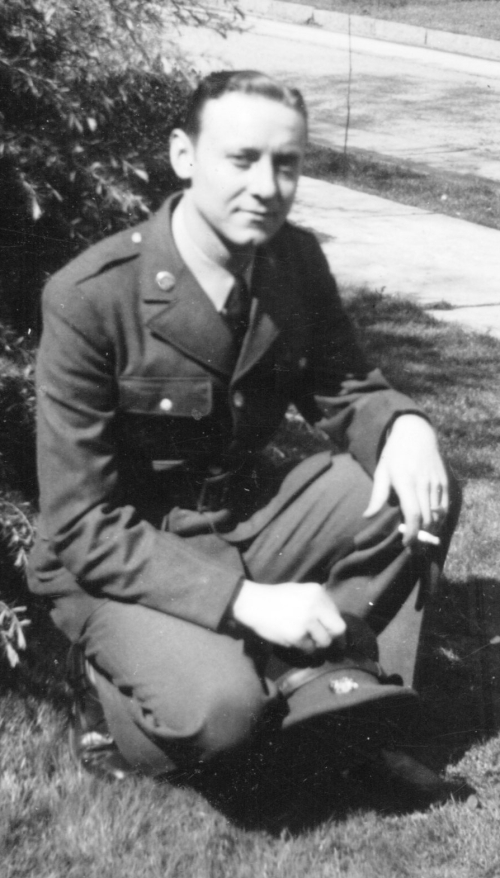 Ozzie never married and died at 73 years old on August 7, 1984. His headstone notes (photo on Findagrave.com) that he was a Captain in the U.S. Air Force. His obituary noted,

He was a retired warden with the Federal Penitentiary, Atlanta, Ga., and had served as chief of the Prison Parole Board in Tallahassee, Fla. He later served as personnel director for the Department of Social Services in Columbia [South Carolina].

Couch served in the U.S. Army during World War II and the Korean Conflict. He was a member of Smith Grove Baptist Church.