Continuation of my previous posts, Gremlins and Lazy Daisy’s Gremlin’s, Part 1 of 3

Why would I think the 384th Bomb Group’s B-17G 42-31222, nicknamed Lazy Daisy, was infested with gremlins? After reviewing the aircraft’s failures in the post-mission documents from her first mission in December 1943 to her next-to-last in September 1944, I was overwhelmed by the number and kinds of problems the aircraft experienced.

Lazy Daisy, a B-17G of the 384th Bombardment Group’s 546th Bombardment Squadron, experienced serious engine problems from the start and was taken out of commission for long periods, presumably for major repairs. Later in her career, she was assigned often as a spare aircraft and unused. At one point, it seems the 546th was trying to avoid using her (my opinion), so she was assigned to other bombardment squadrons of the 384th, and even once to another bombardment group because, (also only my theory) the men of the 546th Squadron didn’t want to fly in her.

When my dad, George Edwin Farrar, told me the story of surviving a mid-air collision between two B-17’s in WWII, he told me the reason the other ship (Lazy Daisy) collided with his ship (B-17G 43-37822), was that Lazy Daisy had been hit by ground fire (flak) which caused it to be knocked off course and into his ship.

I long believed flak was the sole reason for the collision until,

Only the aircraft’s pilot, James Brodie, and co-pilot, Lloyd Vevle, would have been able to answer that question and neither one lived to do so. I can’t pretend to know the extent of what they were facing that day, that moment, that Lazy Daisy collided with my dad’s B-17, but I can look at what kinds of issues Lazy Daisy experienced in the missions leading up to that fateful one on September 28, 1944, and venture a guess.

I reviewed the mission reports of all 64 missions to which Lazy Daisy was assigned, looking for mechanical issues or anything else that stood out, to try to build a greater understanding of the aircraft’s history. Before I get into the mission details, here’s a little background info on the ship.

Lazy Daisy’s start date with the 384th Bomb Group was 23 November 1943 and her first assigned mission was 5 December 1943. Of course, Lazy Daisy’s End Date was 28 September 1944, failing to return from a combat operation due to the mid-air collision over Magdeburg, Germany.

Of Lazy Daisy’s assigned 64 missions, she received combat credit for 49.

Following Taylor’s previous very rough mission of November 29, 1943 in Silver Dollar, he was probably looking forward to a less eventful round trip in his new ship to a Luftwaffe Fighter Airfield in Saint-Jean-d’Angély, France on December 5, 1943. It was less eventful in that Lazy Daisy had to return to base with a broken piston head soon after takeoff.

Not a great start for Lazy Daisy, and in the missions that followed, the ship was plagued by aircraft technical failure after technical failure. Over the course of her life, the crews of Lazy Daisy reported engine problems on 27 missions, including 21 engine/prop malfunctions and 9 supercharger problems (3 missions included both).

It wasn’t hard to notice the many engine and supercharger issues once I had them all in a list. Next question, what the heck is a supercharger?

Fred Preller, the 384th Bomb Group website’s Webmaster, helped me out with this one, noting,

Side note: as you go up in altitude the air pressure lessens, and there is consequently less air pressure to force air into the engine.

So what about all the “lagging” of the superchargers that I read in the pilot narratives of the mission reports? Fred added,

I am not sure of this but I imagine it has to do with the supercharger response to the waste gate setting – in fact, there is quite a linkage between the cockpit and each engine for controlling the waste gate, so it is easy to see that different kinds of problems could occur.

John Edwards, 384th Bomb Group Historian, helped me out when I pointedly asked what would happen to a B-17 during all those supercharger failures? Would it make the aircraft seem sluggish, or lazy? John noted,

A supercharger failure at altitude would certainly make it hard for the aircraft to hold position especially if still carrying the full bomb load and the higher amount of fuel before the target. If the charger is not performing appropriately at lower altitudes, the impact can be slow to climb which puts the aircraft behind schedule and makes the pilot push the engines harder when it finally reaches altitude.

And much more to come about the fascinating subject of superchargers at a later date, following this series…

I can’t help but speculate that once her first pilot, Lt. Sidney Paul Taylor, got to know her “personality”, why wouldn’t he name his new B-17 Lazy Daisy?

So here comes the mission list, and in the list of Lazy Daisy’s missions I present here, December 1943 through April 1944, all the missions were flown by crews of the 546th Bomb Squadron. ALL of her missions aren’t listed. I’ve listed the ones with the most serious problems and if no problems were reported on a mission (although only a few missions had no technical or equipment failures of any kind), that mission wasn’t included either. [May through September 1944 missions coming up in Part 3.]

It would take 8 days of tinkering before Lazy Daisy was assigned to another mission after having problems with the No. 2 engine. So what happened on 13 DEC 1943 with the Taylor crew assigned to the ship for her second mission?

The Taylor crew would not man Lazy Daisy again until Christmas Eve, so on her next mission, Lazy Daisy’s gremlins were able to antagonize a different crew.

The Taylor crew was back on board on 24 DEC 1943, Christmas Eve, but reported no aircraft failures, only an equipment failure that the co-pilot’s microphone was out. Over the next few months, the Taylor crew and other crews reported a slew of problems.

After the April 18, 1944 mission, Lazy Daisy was out of service for almost six weeks (40 days). I turned to my fellow research volunteers of the 384th Bomb Group to help me analyze this and other breaks in Lazy Daisy’s inclusion in combat missions.

384th Bomb Group’s Historian John Edwards’ thoughts on the gap of missions were that,

The SD (Sub-depot) would work the aircraft since it stayed on station. We would see an annotation had the aircraft been sent to a SAD (Strategic Air Depot) or BAD (Base Air Depot). 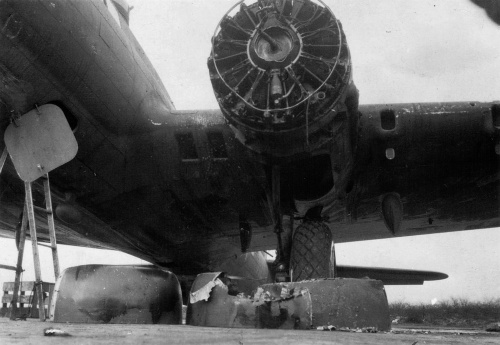 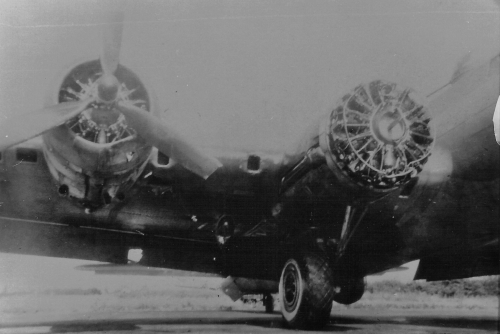 Thank you Fred Preller, John Edwards, and Keith Ellefson for you help on this post.

Stay tuned for Lazy Daisy’s Gremlins, Part 3 of 3 and her return from maintenance…