When I visited England in September 2019, our group of 384th Bomb Group veterans and next generation (NexGen) members visited the airfield museum of the 100th Bomb Group, also known as the Bloody Hundredth, at Thorpe Abbotts. While there, I picked up this list of the heavy bomber (B-17 and B-24) bases in England during WWII. 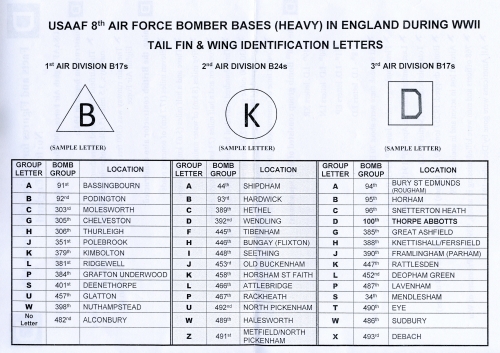 The graphics on the list, which is one of the nicest lists I’ve seen of all the groups, illustrate how the aircraft of different bomber groups were distinguished from one another by their tail fin and wing markings, using a symbol (traingle, circle, or square) combined with a group letter.

The 384th Bomb Group based in Grafton Underwood, England, of which my dad was a waist gunner in the war, can be found in the far left column of the 1st Air Division and used the marking of the Triangle P. The painting below of the 384th Bomb Group’s B-17 42-31740 by Ron Leigh shows a good example of the marking on the tail fin. 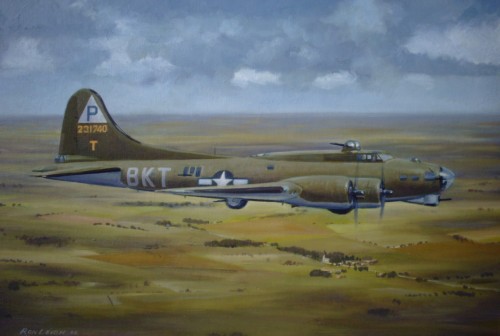 Painting by Ron Leigh. This 546th Squadron aircraft was shot down on 9 April 1944. Courtesy of the 384th Bomb Group website and photo gallery.

Keeping the show on the road…