The Little Girl in the Photo

For the longest time I wondered why my dad, George Edwin Farrar, had this photo of two airmen and three children is his small collections of photographs from WWII. There were no names or any other identifying marks on the back.

544th Bomb Squad area with Air Raid Shelter in the background. The children in the picture are the Denney children, left to right: Bert, Roy, and June.

I assumed the photo was taken on the airbase where he served in WWII, the home of the 384th Bomb Group in Grafton Underwood, England. I wondered who the airmen were, why there were children on the base, and what was in the background.

After many years of puzzling over the photo, I posted a copy of it on the 384th Bomb Group’s Facebook page. I learned that an air raid shelter was in the background of the photo. The airmen still remain to be identified, but to my surprise, a member of the Facebook group, area resident Richard Denney recognized the children.

The boy standing on the left is Richard’s father, Bert Denney. The other two children are Bert’s siblings, brother Roy and sister June. Roy had passed away, but Bert and June still lived nearby. Richard showed the photo to his dad. Bert remembered being on the base that day, but didn’t realize the photo was taken.

During WWII, the Denney family lived in the Keeper’s Lodge, which was on the base, although separated by a gate, very near the 544th Bomb Squadron living area where my dad and the rest of his crew, the John Oliver “Jay” Buslee crew was quartered. 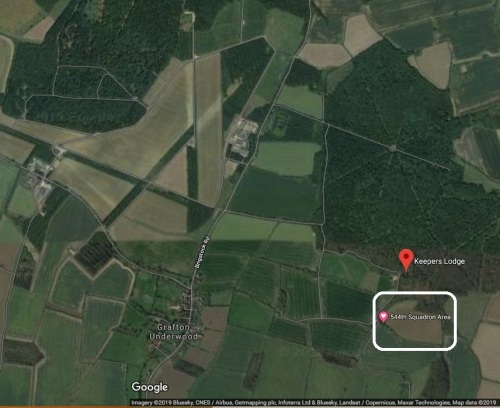 Now I knew what the structure was in the background of the photo and I knew the identities of the children. But I still didn’t know why my dad had the photo in his collection. I didn’t believe my father would have owned a camera at the time. A portion of his military service pay was being sent to his mother to help support the family as his dad was bedridden due to illness and couldn’t work. A camera would have been a luxury my dad wouldn’t have owned. So the photo was still somewhat of a puzzle.

The 384th Bomb Group Historical Association decided it was time for another junket to England and a visit to the 384th’s airbase at Grafton Underwood. As soon as the plans were completed, I signed up to go. I would have a chance to see the airbase where my dad served and maybe I could learn a little bit more about the mysterious photo.

In the time since I posted the photo to Facebook, sadly Richard’s dad Bert Denney also passed away. But the little girl in the photo, June, still lived nearby and would be in Grafton Underwood on the day of our group’s visit.

Meeting Richard Denney and his Aunt June was one of the highlights not only of the day in Grafton Underwood, but of my entire trip to the UK. It felt surreal to meet the woman who was the little girl in the mystery photograph.

But I still didn’t know why my dad had the photo. While visiting with Richard and June, I pulled out some photos I had brought with me of my dad and his crew. I showed June a photo of my dad and some of his enlisted crew mates and she didn’t recognize Dad or his crew mates. (Dad’s the one on the left in the photo below). 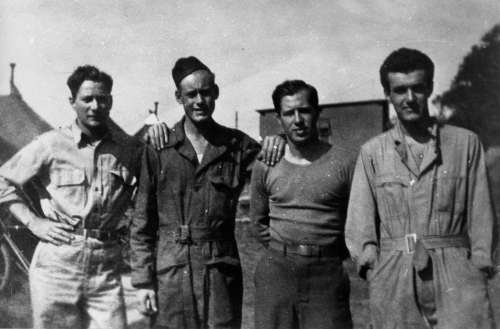 Then I showed June the Buslee crew photo.

She pointed to John Oliver “Jay” Buslee and thought she recognized him. (He’s standing on the far left in the photo). I told her his name was John Buslee and the name didn’t ring a bell, but when I told her he went by the name “Jay,” she said, “Yes, the pilot Jay. He used to come to our house for tea or a nip of wine.”

Their house. The Keeper’s Lodge. The Denney home of more than fifty years which was so close to the 544th Bomb Squadron living area. It was becoming clear. Jay Buslee took the photo of the Denney children because he knew them from visiting their home.

Bert Denney at the Keeper’s Lodge in Grafton Park Woods, home of the Denney family for nearly 50 years. Photo courtesy of Richard Denney.

June and I spent as much time as possible together on my visit to Grafton Underwood, but of course time was too short that day with a tour of the airbase planned and other people to meet. But she did share a few wartime memories with me. The window on the second floor at the end of the house (on the right in the above photo) was her bedroom window. And she remembers the day a 384th Bomb Group airman from a B-17 crashed through the then thatched roof of the shed (on the left in the photo) and survived with only a broken leg.

Now the mystery of the photo was clearing even more. I believe the 1944 photo was taken by pilot John (Jay) Buslee and given to my father, George Edwin Farrar, who was the waist gunner on Buslee’s crew, by Jay’s father. Jay was killed in the September 28, 1944 mid-air collision in which my father, the only survivor, became a POW. My father lived with Jay’s family for almost 4 years after the war. Jay’s father must have wanted my dad to have some of the photos Jay had taken at Grafton Underwood and this was one of them.

I didn’t have this photo of Jay Buslee with me in England, but I’m sending June a copy so she can have a photo of the man who was a friend to her family. 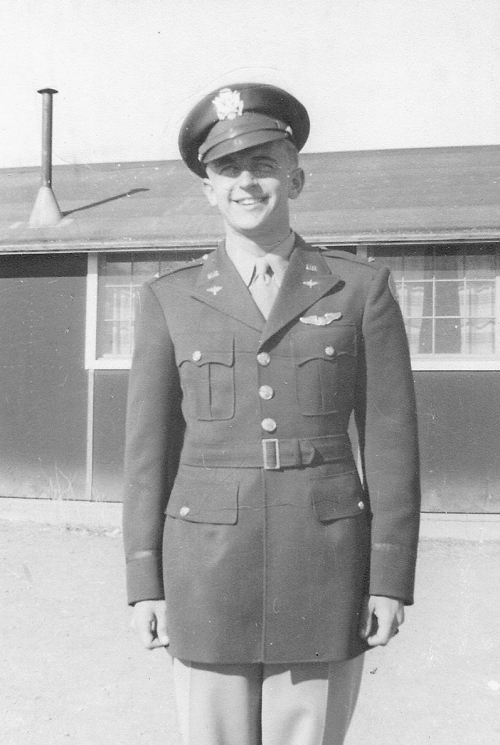 In undoubtedly one of the highlights of my year, I was delighted to meet the little girl in the photo and learn its story while I was in the same village it was taken, where my dad was stationed seventy-five years before.

In fact, our meeting occurred on September 21, 2019, just one week short of the seventy-fifth anniversary of the day Jay Buslee lost his life in the mid-air collision, the day he left Grafton Underwood at the controls of a B-17, never to return. Though he’s been gone seventy-five years, that little girl from 1944, June Denney, still fondly remembers him.

Tags: The Little Girl in the Photo