When I was a child, my dad often told me a story at bedtime that I doubt many other kids growing up in America ever heard. Dad’s story was about a time when he was in the service in WWII that his plane was “knocked down.” He was a waist gunner aboard one of the Mighty Eighth Air Force’s B-17’s and on September 28, 1944, another B-17 in the formation collided with his over Germany.

My dad’s B-17 split in half. He was knocked unconscious and was thrown from the ship in the impact. There isn’t a lot of room on a B-17 and most of the airmen didn’t wear their chutes. They mostly used chest chutes rather than parachutes worn on the back and would generally wear only the harness, keeping the chute nearby so they could grab it quickly if they needed it. My dad was wearing his that day, but not completely hooked up to the harness.

Free-falling toward earth, he woke up when he heard his mother call his name, something he always included in his story, but never mentioned in official reports. He hooked up and opened his chute, and then passed out again. When he woke up again, he was on the ground and an old woman was beating him with a stick.

As I got older, the telling of the story stopped, but I would never forget it and the images it had burned into my mind.

In 2011, a cousin who had also heard the story growing up was living in the Netherlands and she and her husband were touring the American military cemeteries of Europe. She thought of my dad and his story and asked for the name of his unit and the date and location of his last mission.

I had a box of dad’s military documents and letters, and gave her the info. He was in the 384th Bomb Group based in Grafton Underwood, England and his last mission was to Magdeburg, Germany on September 28, 1944.

My cousin, Terry, performed an internet search and found dad’s record on the 384th Bomb Group’s website. I hadn’t thought about my dad’s WWII service in years – he had died in 1982 at the age of 61 – and I wasn’t even aware of the website. Not only did I find a list of all of his missions, I found the Missing Air Crew Report for the mid-air collision. Scrolling through the pages, I found Dad’s official statement in his own handwriting. 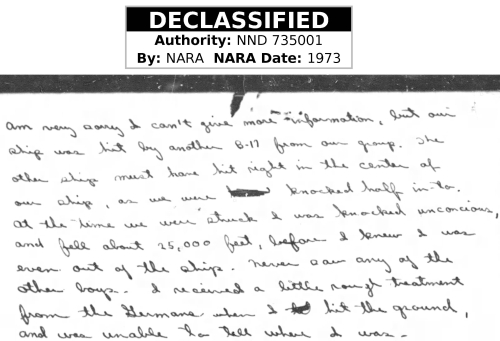 Dad’s story. It was so familiar. He continued with a question, a request, that led me into my research of Dad and his crew mates and the airmen on the B-17 that collided with his. What happened to the boys, and something he didn’t ask, why.

While this was a great find and gave me much more detail of the information I had on my dad’s military career, it was not the find that almost knocked me out of my chair.

Terry found a narrative of Dad’s story on the internet, too. Only it wasn’t told by my dad. It was told by a man named Wallace Storey, a WWII pilot who witnessed it happen right in front of him. I read and re-read Wallace Storey’s account, not believing it possible to hear Dad’s story twenty-nine years after he died.

Wallace Storey was flying co-pilot in the right-hand cockpit seat in his crew’s B-17 that day and had the controls at the time of the collision. In an excerpt from his book, A Pair of Silver Wings and the Eighth Air Force, which I read online, he wrote:

Flak was extremely heavy that day and the Wing had been somewhat disrupted by the heavy opposition. We found ourselves on a crossing course with another Group and just after “bombs away” the lead ship made a sharp descending right turn. Our high element, being on the inside of this steep turn, had to move quickly by reducing power while climbing slightly.

Glancing to my right, I saw that “Lazy Daisy” was sliding toward me. I pulled back on the control column to climb out of her path while keeping my eye on the #2 ship of the lead element, Lt. Buslee [the pilot of the plane my dad was on] … on whose wing our element was flying.

I yelled to Gross [the pilot of Storey’s plane in the cockpit’s left seat] to watch for him to come out on the other side and, sure enough, he slid under us and right into Buslee in the lead element.

I watched the two planes as they collided. It cut [Buslee’s plane] in half and the wings on [“Lazy Daisy”] folded up and both planes fell in a fireball. They were 18 men lost in those two ships. We didn’t see any chutes as we continued our turn to the right.

After reading his account, I found Wallace Storey and spoke to him on the phone. Then I visited him at his home and sat next to him as he told me the story. 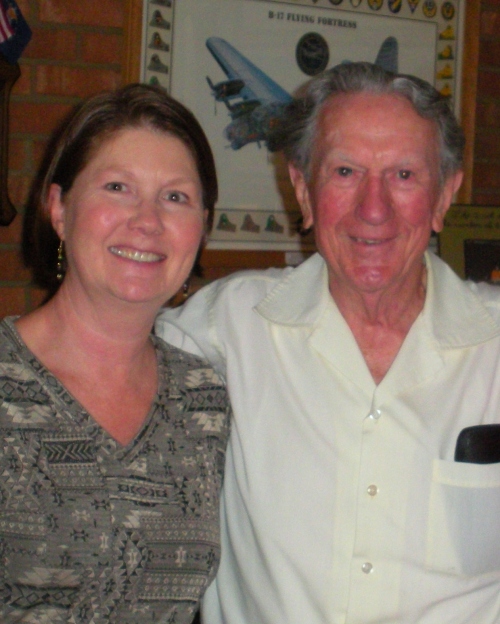 He gave me contact information for a few relatives of the two crews, and I have since discovered more through Facebook. I started the blog to share transcripts of the letters I had from the families of the boys missing in action on my father’s plane. Relatives found the letters online and contacted me.

My interest in military research has grown, but mainly centers around the two crews involved in the September 28, 1944 mid-air collision, my dad’s bomb group, and other bomb groups of the Mighty Eighth Air Force based in England in WWII. I have been attending reunions in the US since 2014 and in September this year traveled to England to tour my dad’s base at Grafton Underwood.

I help other NexGens (next generation members) start their own research and have even had a hand in connecting British children and grandchildren to their American families. It seems some of the American airmen who served in England left more than their footprints behind.

The excerpt from his book, A Pair of Silver Wings and the Eighth Air Force by Lt. Col. Wallace Storey, USAF (Ret.) and Mrs. Martha L. Storey, is provided for use on The Arrowhead Club website by the kind permission of the authors, who assert full ownership of copyright for the material. Use of this material is limited to the following provisions.  This excerpt is intended for unrestricted private use. Please copy and use as needed to support your WWII research. If you wish to incorporate this information in a commercial product of any kind, request authorization from Lt. Col. Wallace Storey, USAF (Ret.) in advance.

To be continued with Military Research parts 2 and 3…

With the exception of material in this post copyrighted by Wallace A. Storey, © Cindy Farrar Bryan and The Arrowhead Club, 2019