When I returned from the 384th Bomb Group’s 2018 reunion in Dayton, Ohio, I posted a few photos here.

I have now had a chance to sort through the three hundred-plus photos I took and have posted about five dozen in the group’s photo gallery. The link is to the main album, which contains all photos contributed by reunion attendees. My photos, at least for now, are in the sub-album “Cindy Bryan’s Photos.” These may be rolled up into the main album in the future, so if you don’t see my sub-album, you can assume all my photos have been moved into the main album.

Here are just a few more of my photos from the 2018 Reunion in Dayton, but you can see lots more using the photo gallery link to the group’s online photo gallery.

Friday, October 19 – Our visit to the National Museum of the US Air Force

After a short bus ride from our reunion hotel, we gathered around the 384th Bomb Group memorial outside the museum. An honor guard presented the colors and taps was played. 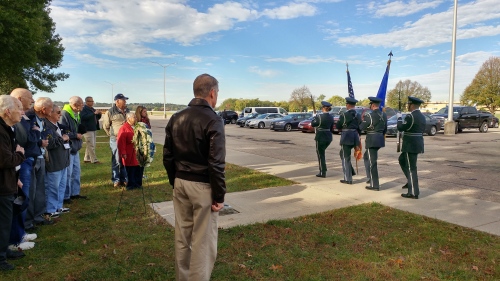 The five 384th Bomb Group veterans who attended the reunion posed for a photo on this cold Dayton morning.  Attending were (left to right): 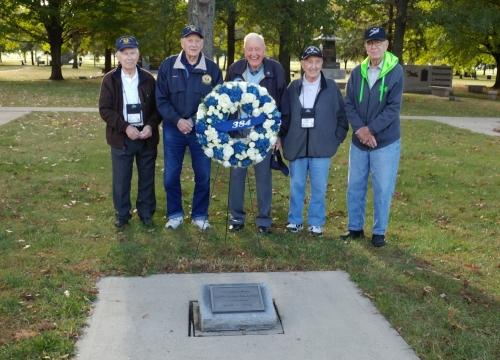 Veterans of the 384th Bomb Group pose behind the group’s memorial at the Museum of the USAF
Left to right: Peter Bielskis, Henry Sienkiewicz, William Wilkens, John DeFrancesco, and Donald Hilliard

Never missing an opportunity to photograph our veteran heroes, our group posed inside the museum in front of the Memphis Belle (see previous post), and with UK friend of the group, Neill Howarth, in front of the museum’s soaring stained glass backdrop. 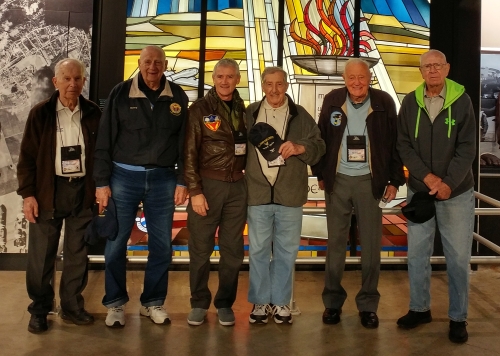 Our group got a close look at the restoration work on the museum’s B-17 Champaign Lady, getting a hands-on educational opportunity in our favorite subject, the Flying Fortress. We held parts in our hands, crawled through the work-in-progress fuselage and ball turret, and, of course, took more photos.

We even had the opportunity to meet two local WWII Army Air Forces veterans from different bomb groups, Red Ketcham and Art Kemp, who were also based in England during the war. You can see their photos in the gallery. 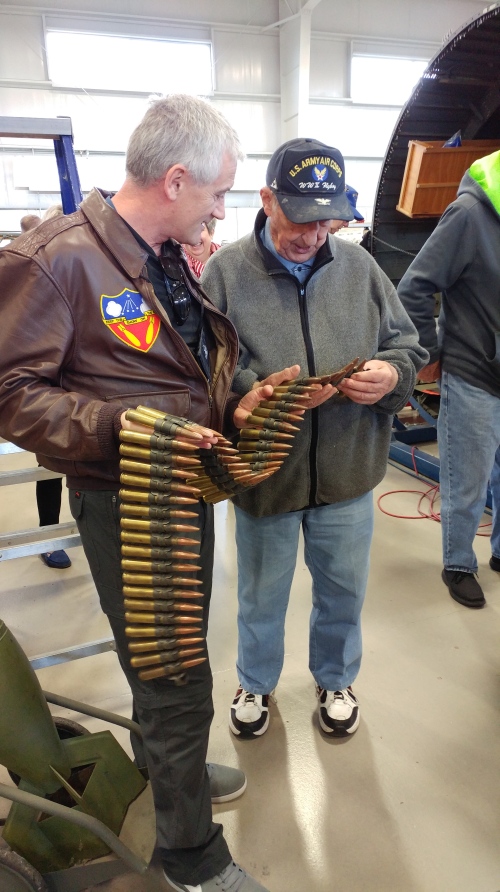 At the Champaign Aviation Museum, left to right: Neill Howarth and John DeFrancesco

Our 384th veterans gathered in front of Champaign Lady… 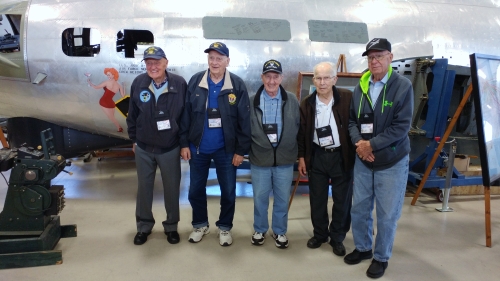 The obvious “stars” of our group are our veterans, but as the number of surviving veterans dwindle, it is up to the next generation of children, grandchildren, nieces, and nephews in our group to carry their memory forward.

In addition to our five veterans, twenty-seven family members and five friends of the group gathered in Dayton this year. It is not just our country’s history we celebrate when we gather, it is our family history, too. Others like me seek to learn everything we can about our relatives’ involvement in that time long ago, not just for ourselves, but so that we can pass this knowledge down for generations to come. 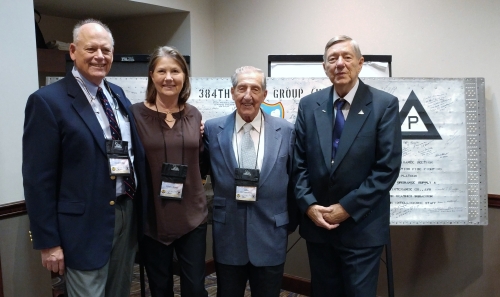 It took several days for me to return to “normal” from the travel between Florida and Ohio, and the reunion itself. But after my immersion of several days into the WWII air war over Europe, it will take me much longer to return to 2018 from 1945. Part of me is still there in that different world in that long ago time.