Part 2: The Boy Who Took My Place in the Water 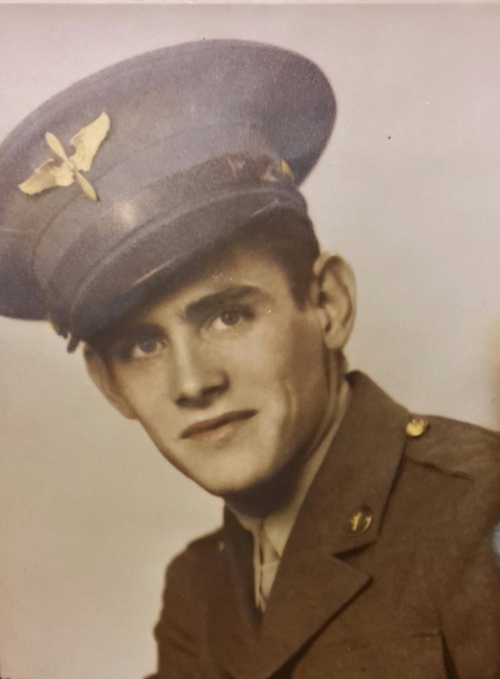 Sergeant Jack Coleman Cook of the 384th Bomb Group of the 8th Air Force in WWII was Delia Cook McBride’s uncle. Delia never had the chance to meet her mother’s brother because he died in WWII. He was a family legend, only known to her through the memories of her family and the scrapbook her grandmother made with photos, newspaper articles, and letters. The scrapbook was the last connection Jack’s mother, Mary Ellen Cook, had to her son. Like so many others, Jack went off to war and never came back.

In my lengthy research of Jack Cook, I had two main questions surrounding his death. One, did Jack receive any awards recognizing his actions on February 3, 1945 when his shot-up B-17, the Challenger, was forced to ditch in the North Sea? Jack’s pesonnel record was burned in the big fire at the National Personnel Records Center (NPRC) in 1973, leaving no record of any awards.

And, two, did Jack’s family know of his bravery and heroism on that day? Jack’s Individual Deceased Persons File (IDPF) was not stored at the NPRC at the time of the fire, although it is now. A letter from Brigadier General Ray L. Owens is included in that file. It is dated May 2, 1945 and notified Jack’s parents that:

The crew had to swim for life rafts, and three of the crewmen did not reach any of the rafts. These three crew members were the pilot, Second Lieutenant Robert C. Long, the radio operator, Sergeant Fred A. Maki and your son. The bodies of your son and the pilot were recovered.

Was this all that the Cook family knew about the ditching? They were led to believe that Jack died in the North Sea without ever reaching a life raft. Did Jack’s parents go through their entire lives without knowing of Jack’s heroism?

Many newspaper articles reside in the Cook family scrapbook, and though they are old and yellowed, play their part in keeping Jack’s memory alive. Most of them report the same story of the sad day when Jack lost his life in the North Sea, how Jack, fearing the life raft overcrowded with most of the crew would capsize, got into the North Sea and maneuvered it “acting as a human propeller” to come alongside the raft containing the unresponsive pilot.

Most of the newspaper stories were likely written from the Stars and Stripes account of the ditching of the Challenger on February 3, 1945. None of them mention specifically that Jack Coleman Cook gave his place in the life raft to Edward Field, but some do note that Jack rescued another member of the crew, likely a reference to Jack’s trading places in the water with Edward. 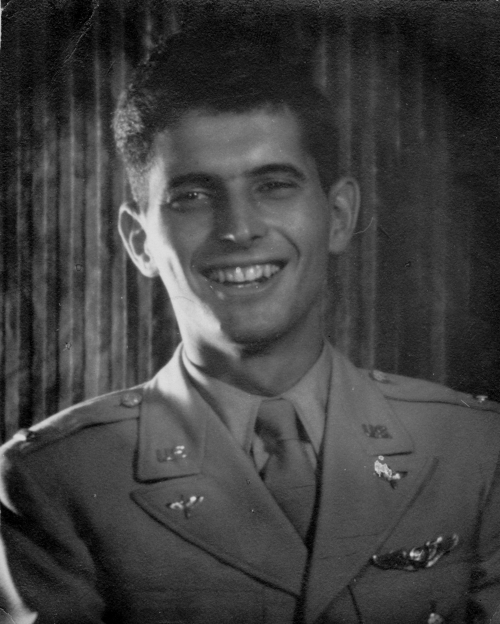 As for awards, the August 26, 1945 edition of the Hot Springs, Arkansas Sentinel Record reported the news of a ceremony presenting Jack’s medals to his family with this accompanying photo:

The young airman, ball turret gunner on a B-17, died of exposure in the icy waters of the North Sea where his plane crashed February 3. He was cited for his courage and heroism in rescuing another member of the crew and in making himself a human propeller to keep rafts holding the remainder of the crew together until a rescue craft arrived. This action won him the Bronze Star award. The Air Medal was for meritorious action in raids over enemy territory from January 29, 1945 to February 3.

But it was the family of pilot Robert Long who likely were the Cook family’s original source of the news of Jack’s bravery on February 3, 1945.

The Hot Springs, Arkansas Sentinel Record reported (date unknown) in an article entitled Sgt. Jack Cook Died of Exposure in North Sea in Effort to Save Other Members of Fortress Crew, that Mr. and Mrs. Prince Cook, parents of Sgt. Cook, were sent a newspaper clipping about the ditching by Mr. and Mrs. W. H. Long, parents of Lt. Robert Clay Long, 24, pilot of the Challenger, who lost his life at the same time as Sgt. Cook. It stated:

Another important source of information for Jack’s parents was Jack’s crewmate, Howard J. Oglesby, who had survived the ditching. Howard, like Jack, was originally from Memphis, Tennessee.

Some of the newspaper stories told of letters Howard Oglesby wrote to Jack’s parents. One story shared an excerpt of a letter from Howard to the Cooks:

Your son died a hero’s death. He died in an effort to save the other crew members, and did one of the bravest things I’ve ever seen a man do.

Another article notes that Howard also wrote in a letter to the Cooks:

No doubt by now you have received notice of your son’s death and of the brave way in which he died. I was with him when it happened and I saw him die. Mr. Cook, Jack was a fine boy and everyone thought well of him, and he thought there was no one like you.

Mr. Cook, if you only knew about Jack’s death as I do you wouldn’t feel near as bad. He died a hero’s death in a effort to save or trying to save other crew members. He did one of the bravest things I’ve ever seen a man do.  That boy had great courage and plenty of it.  I will always admire him for his courage and bravery. He did things that no one thought was humanly possible. 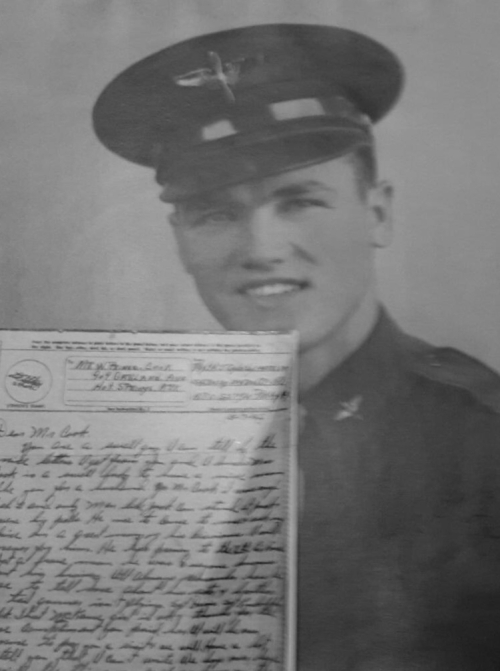 Howard J. Oglesby and one of the letters he wrote to Jack Cook’s parents
Photo courtesy of Delia Cook McBride

Mr. Cook it was rough Feb 3 and only men like Jack Cook can stand it.  Jack and I were big pals…I will never forget him.

Because of Jack Coleman Cook’s heroism and bravery in the February 3, 1945 ditching of the Challenger, the navigator he saved, Edward Field, has enjoyed a long, wonderful life and will turn ninety-four next month. Edward was able to pursue his dream and have a lifelong award-winning career as a poet.  Edward was recently inducted into the New York State Senate Veterans’ Hall of Fame. His Hall of Fame plaque honors the man who gave his life to save Edward, Jack Coleman Cook. 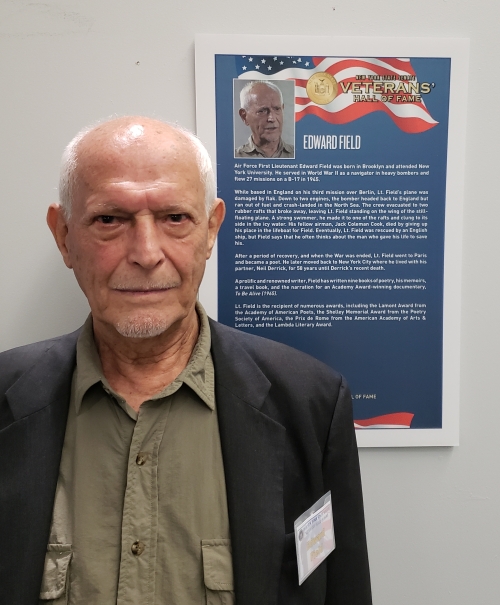 Now I know. I know Jack was honored for his bravery and heroism in 1945 and in 2018. I know Jack’s parents learned of their adopted son’s heroic actions and the details of his death on February 3, 1945. But I also know how a family who claimed Jack Coleman Cook as their own for a mere dozen years suffered his loss for very much longer than the time he was part of their lives. Earlier this week on Memorial Day 2018, I remembered Jack Coleman Cook. Like Howard Oglesby and Edward Field, I will never forget him.

Jack’s niece Delia plans to have the contents of the family scrapbook scanned and when I receive the scanned images, I will upload them to the 384th Bomb Group’s photo gallery. In the future, be looking for the Jack Coleman Cook collection in the Robert Long crew album courtesy of Delia Cook McBride. Thank you so very much for sharing these family memories with us, Delia.

Thank you to 384th Bomb Group researcher and combat data specialist Keith Ellefson for contributing to this article.