Budd Peaslee – Part 6 was published November 29, 2017 here. (Scroll to the end of this post for links to the entire series).

In Heritage of Valor, Budd Peaslee describes air battles, including the brutal first Schweinfurt mission, from the Summer of 1943 into the Fall. He quotes statistics, including numbers of bombers lost and number of men lost. But the most memorable words of his book to me are not the statistics, but his understanding of the brutalities of war and his empathy for the men who served under him. He wrote:

The men who flew the missions were numb with fatigue and the mental strain of facing death in one form or another – from hundreds of thousands of shrapnel fragments, cannon projectiles, bursting bombs, bullets, fire, oxygen starvation, or a fall from five miles up to sudden and total destruction on the ground. This kind of war had no foxholes or dugouts, no hedgerows or earthworks, no place to hide, no place to run; it was a far different kind of conflict than man had before faced.

In the absolute darkness of the blacked-out metal huts of the combat crews there was silence except for the regular heavy breathing of those who slept and the creaking of the restless bedsprings of those who couldn’t. Always, day and night, day after day and night after night, there was the distant rumble of engines, as much a part of the air as oxygen. The engines were never still, but had to be listened for with effort except when some crewman revved up a nearby bomber engine to test the replaced spark plugs or the power output of a new turbo-supercharger. In this lonely darkness a man was alone with himself and his thoughts, from which there was no escape. It was in this hour of truth that those with the keenest sensibilities suffered the most. To some the thought of what they and their comrades must face on the morrow took possession of their minds and with it came a vague sadness for those they had seen falter in the vast expanses of sky and then start the long fall toward oblivion.

He continued with the answer to another question – why didn’t our fathers talk about the war?

To some came the nameless dread of the future for themselves, and the restlessness of suspense while waiting for the inevitable. To others, the more sensitive, there was thought of the guilt they bore for their acts and contributions. They saw the masses of the innocent, the aged infirm and helpless, the young, the uncomprehending and the pitiful – all shocked and torn by the devastation of fire and blast that was of their making. These were the things that besieged the mind, that could not be changed or buried by conversation with a companion, or a new romance with a willing British maid, or the ordering of another drink from the club bartender. This was man living with himself in the darkness of his thoughts, but hoping for the blessed oblivion of sleep, dreading to hear the approaching footsteps of a runner summoning him to the duties of war.

Budd Peaslee was a commander to whom the airmen and ground crews of the 384th could relate. He left the 384th on September 8, 1943, but he would forever be THE commander of the 384th, “the Boss.” 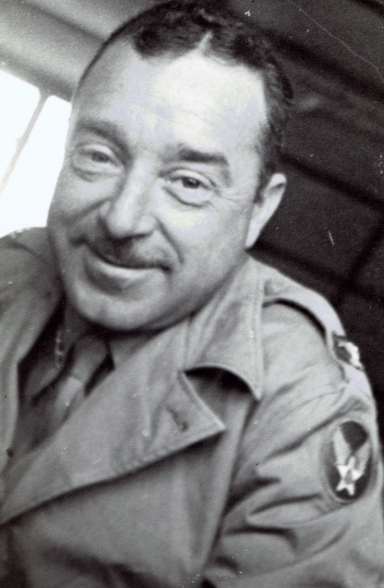