One of the subjects I have neglected for the past six months is my series of posts on 384th Bomb Group Commander Budd Peaslee. I’d like to finish up the series before the end of the year, so the next several posts will be all about Budd Peaslee.

The 384th Bomb Group joined the Eighth Air Force flying missions over Europe in the first week of June 1943 with thirty-five combat crews. Replacement bombers and replacement crews would be added as original crews failed to return. In the first three months of operation, forty-two 384th Bomb Group bombers failed to return from missions over Europe, representing a 120% loss. At this time in the war, a flyer’s tour was defined as twenty-five missions.

In his book, Heritage of Valor, Budd Peaslee offers insights into WWII, and air war in general, that I have never seen from any other source. The following is a paragraph from Peaslee’s book.

Recorded history has little to say about great air battles or significant happenings of aerial combat. As an army or navy moves ponderously across the surface of the earth there is time to record the strategy of its generals or admirals. There is even time to speculate on their thoughts and motives, and to make analysis of their decisions. And there is time to record and reward great acts of heroism and courage, and to condemn and punish cowardice and error. But with an air force, although the drama and heroics are undeniably present, the occurrence is condensed in time and expanded in space to such an extent that the record of significant decision is lost forever to the world. That there are momentous occasions – as an air force moves from deep in the friendly zone, mounts into the firmament, crosses multiple sea and mountain barriers and national boundaries, to penetrate in a few hours to the very heartland of the enemy and there to strike a devastating blow – let no one doubt. That these deeds are lost to history and to the people is the unfortunate penalty of the era of speed that will become worse, never better.

As a heavy bomb group commander based in England, in the summer of 1943, Peaslee identified another enemy of the 8th Air Force, or at the very least an obstacle to a successful air war, poor weather conditions.

In these early months of day bombardment, success was dependent almost wholly on a favorable weather situation, not only over the bases where the bombers must rise and assemble into formation and to which they must return, but also along the routes and in the target area. In truth the weather had turned out to be the greatest enemy of the American scheme and until it was defeated, or at least neutralized to a great extent, the effectiveness of daylight operation with massive striking forces against precision targets was open to serious and skeptical scrutiny.

During that same summer, Peaslee recalls a particular mission in his book, Mission 9 on July 24, 1943. 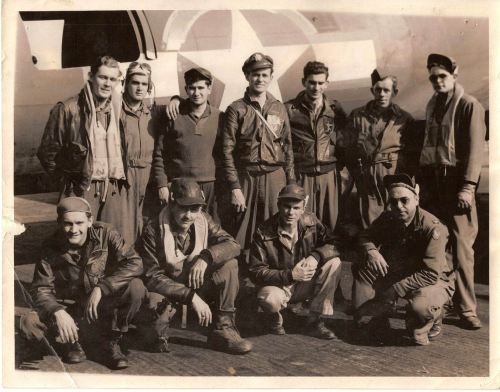 The bombing at Heroya has passed into history and is rarely recalled, except by those who made the trip and who still survive. To them it was the most successful and shrewedly planned and executed mission of the entire war.

384th Bomb Group veteran Burnia Martin flew that mission. I met Burnia at the 8th Air Force reunion in New Orleans this year, but wasn’t aware of his participation in that mission, and missed my opportunity to hear about it in person.