On June 6, 1994, the French government commemorated the 50th anniversary of D-Day (the invasion by the Allied forces of Normandy on June 6, 1944) by distributing the French Jubilee of Liberty medal to U.S. veterans who participated in the Normandy campaign. The medal was first awarded to American servicemen for their participation in the Battle of Normandy. They were minted at the request of the Regional Council of Normandy to be presented to the veterans attending the 50th anniversary of the D-Day landing. Eligible veterans included those who served in the Normandy campaign from June 6 to August 31, 1944, and were part of the of land forces, off-shore personnel, or airmen flying overhead. The first medals awarded were those presented in the anniversary ceremony to the veterans attending.

The French government no longer awards the Jubilee of Liberty medal. However, they have granted the 8th Air Force Historical Society approval to mint and distribute the medal to eligible veterans or the families of eligible deceased veterans who qualify for the award. A certificate accompanies the medal. 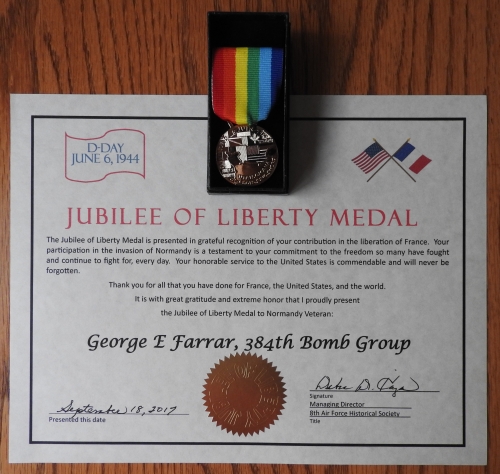 My Dad’s Jubilee of Liberty Medal and Certificate

The Jubilee of Liberty Medal is presented in grateful recognition of your contribution in the liberation of France. Your participation in the invasion of Normandy is a testament to your commitment to the freedom so many have fought and continue to fight for, every day. Your honorable service to the United States is commendable and will never be forgotten.

Thank you for all that you have done for France, the United States, and the world.

the Jubilee of Liberty Medal to Normandy Veteran:

The front of the medal is inscribed with “Overlord 6 Juin 1944” on the upper part of the medal, with the flags of the Allied nations and the names of the landing beaches completing the face of the medal. 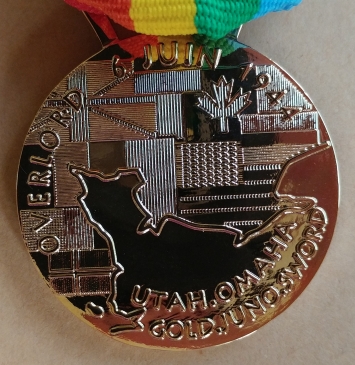 The reverse of the medal shows the Torch of Freedom surrounded by the device of William the Conqueror “Diex Aie” (“God is with us” in Norman French). 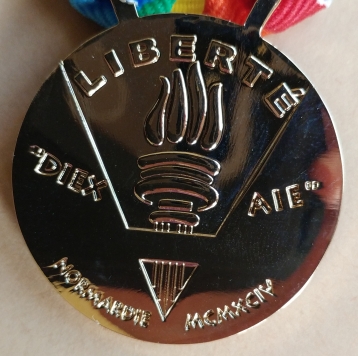 Dad’s Jubilee of Liberty Medal, back

Dad, George Edwin Farrar, participated in the Normandy campaign with the 384th Bomb Group in August 1944, which made him eligible for the award. I applied for the Jubilee of Liberty medal for him as soon as I found the application instructions in the September 2017 issue of the 8th Air Force News. As I hold this medal in my hand, it becomes more than metal and ribbon. It is a reminder for me of my dad’s service to our country and his fight for not only our freedom, but France’s and the free world.