The March 2017 issue of the 8th AF News contains a wonderful story, “Band of Daughters.” The story is about two women, Ellen Hartman and Laura Edge, and their adventure together to visit the WWII prison camp, Stalag Luft IV, where their fathers and my father, were held as prisoners of war. You can read the story here.

Laura holds a Masters of Social Studies Education degree and wrote the book “On the Wings of Dawn:  American Airmen as Germany’s Prisoners – Their Story of Courage, Sacrifice, and Survival.” Ellen owns her own public relations agency in Atlanta and is just beginning to research her father’s service in WWII. You can read the post I wrote about Ellen’s father, Joe Weaver, here.

I contacted both Ellen and Laura and learned that they had big plans for this year’s Fourth of July weekend in Savannah. They would be visiting the National Museum of the Mighty Eighth Air Force. Joining them would be Zygmunt Wujek, a Polish sculptor, and Jupi Podlaszewski, head of the English School of Koszalin. Zygmunt created the memorial sculpture at the site of Stalag Luft IV.

Zygmunt Wujek has created more than two hundred memorials in his native Pomerania including monuments commissioned by Lech Walesa to mark the entrance to Stalag Luft IV. Zygmunt also created a bronze bust of an American airman from a photograph of Stalag Luft IV POW Joseph O’Donnell, author of the book “The Shoe Leather Express.”

Also joining the group as the third Stalag Luft IV daughter would be Candy Kyler Brown. Candy wrote the book “What I Never Told You:  A Daughter Traces the Wartime Imprisonment of Her Father.”

A WWII veteran of the 8th Air Force, Walter Grotz, was to join the group. Walter, of the 445th Bomb Group and his wife, Mary, sponsored the Polish dignitaries’ journey to the US. Walter and Mary had a B-24 propeller blade to donate to the museum and wanted Zygmunt to see his American Airman’s home in the museum. Walter became a prisoner at Stalag Luft IV when he had to bail out of his B-24 on the November 26, 1944 mission to an oil refinery at Hannover, Germany. Sadly, Walter Grotz died in May, but his wife, Mary, carried on Walter’s wishes and joined the group in Savannah. 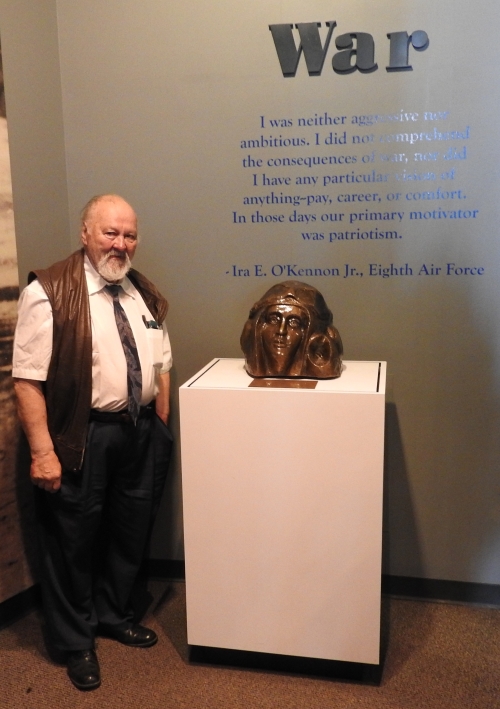 The American Aviator bronze bust (as described in the accompanying plaque) …

is the only exact copy of the “American Aviator” in the 1992 memorial at Stalag Luft IV, the WWII prison camp for enlisted American airmen in Poland. Wujek used a photograph of Joseph O’Donnell, a  POW at Stalag Luft IV, as his model. At the 2006 dedication of the site as a Polish War Memorial, Wujek gave this bust to former POW Walter Grotz. It took Grotz five years to make the necessary import arrangements, and in 2011 he delivered the bust to this museum which will be its permanent home. Wujek presented it on behalf of the people of the Pomerania region of Poland as a Thank You to Eighth Air Force Veterans, all Veterans and the people of the United States.

The organizer of the Savannah group, Ellen Hartman, was kind enough to invite me at join them as the fourth Stalag Luft IV daughter. And I, knowing that a WWII veteran living near me, John DeFrancesco, had a great desire to see the Museum of the Mighty Eighth Air Force, invited him to go to Savannah with me. John had been a POW in WWII, but not in Stalag Luft IV.

John was a pilot with the 384th Bomb Group, 544th Bomb Squadron, the same group and squadron in which my dad served. John was on his thirty-fifth mission on January 8, 1945 to a railroad line in Kyllburg, Germany when two of his engines exploded and his B-17 caught fire. After bailing out of the crippled aircraft, John was a POW at Stalag 13D Nuremburg (Oflag 73) Bavaria, an officers’ camp, and later after a forced march, was held at Stalag 7A (Moosburg).

Our experience at the Museum of the Mighty Eighth Air Force was extraordinary. In addition to touring the museum on our own (we took advantage of every free moment in our schedule to see as much as we could), we had two excellent guided tours.

Our first tour was led by 384th Bomb Group, Inc. Historian and NexGen Research Director John Edwards. John was one of the original nine who started the Museum of the Mighty Eighth. Between John’s history with the museum and his interest in aviation research, John’s tour offered our group a unique insight to the museum and the WWII history of the 8th Air Force.

Our second tour was led by Al Pela, museum docent and son of Stalag Luft IV POW Albert Pela who was a flexible gunner with the 100th Bomb Group, also known as “The Bloody Hundreth.” Albert’s B-17 crashed at Gottesgab (now Bozi Dar, Czech Republic) on September 11, 1944. Al’s stories of his father’s experiences at Stalag Luft IV added another perspective to our museum experience.

Just past the POW exhibit in the museum is a display case in which the vest that Candy Kyler Brown’s father, John Roland Kyler, made while he was a prisoner of war in Stalag Luft IV. Candy proudly shows her father’s work to the group. Kyler knitted the vest from a Red Cross-provided kit and he was able to bring it home on his trek across Germany in the Black March.

The museum is full of wonderful displays. John DeFrancesco stands in front of a memorial to the 384th Bomb Group complete with a model of a B-17.

Past a set of glass doors at the back of the large space housing the B-17 and other aircraft is the museum’s memorial garden. The garden is a beautiful, peaceful place full of memorials to groups and members of the 8th Air Force and the Chapel of the Fallen Eagles.

Inside the chapel are a multitude of stained glass windows…

… including a replica of the one honoring the 384th Bomb Group in the Church of St James the Apostle in Grafton Underwood, England.

John DeFrancesco stands in front of a replica of the 384th Bomb Group Memorial in Grafton Underwood, England, where the group was stationed during WWII. 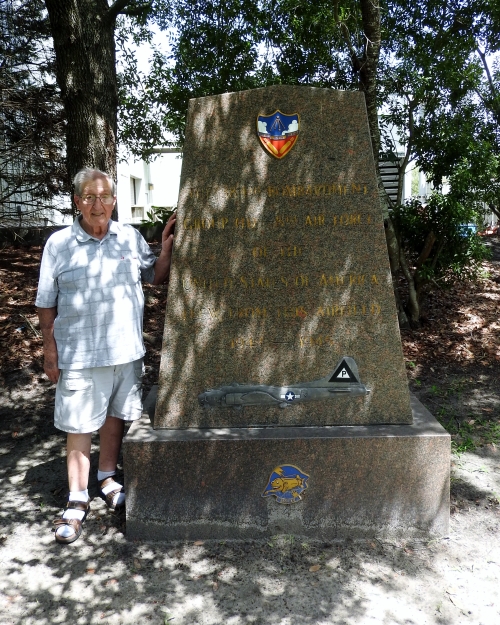 After some help from Al Pela, I was able to find the memorial to the Brodie crew of the B-17 Lazy Daisy which collided with the B-17 Lead Banana on which my dad was the waist gunner on September 28, 1944.

To end this wonderful weekend, our group was honored at the American Legion Post 135 which is housed at 1108 Bull Street in Savannah, where on January 28, 1942, the Eighth Air Force was activated.

In addition to honoring the WWII veteran of our group, John DeFrancesco, the American Legion also honored Zygmunt Wujek, Walter Grotz, and each of the Stalag Luft IV daughters’ fathers.

Following the ceremony at the American Legion, our group enjoyed a spectacular dinner right next door at the restaurant Local11ten. It was the perfect ending to the perfect adventure for this group which was brought together because of a shared history in WWII. That adventure ended, but I suspect a new journey is just beginning. 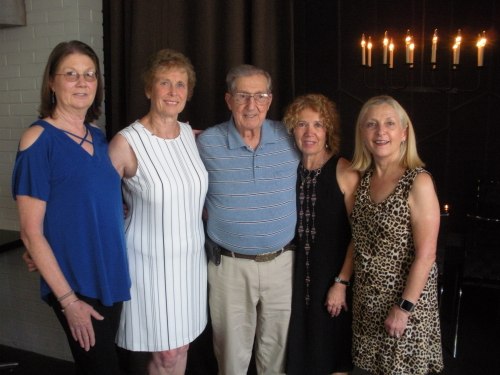