My dad flew sixteen missions with the 384th Bomb Group of the 8th Air Force in WWII, but the only mission location he marked on this Invasion Map of Europe in his World Atlas was Magdeburg, Germany. It was the only mission he told me stories about, the one where another B-17 collided with his and he lost all of his fellow crewmates on that ship that day. 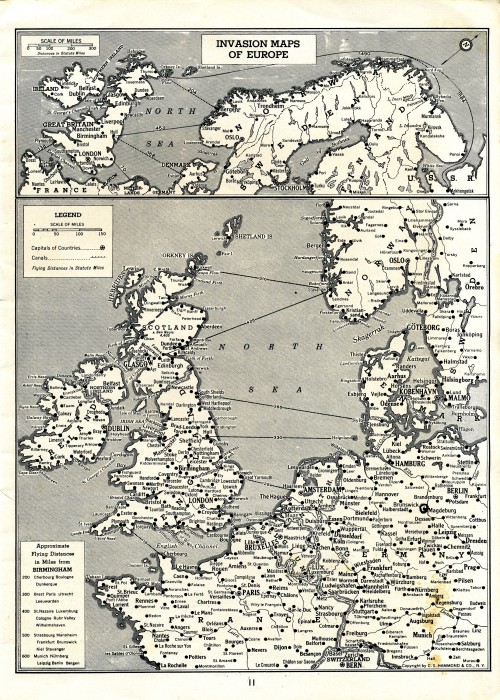 In a report to the military after his return to the States, he wrote:

Am very sorry I can’t give more information, but our ship was hit by another B-17 from our group.  The other ship must have hit right in the center of our ship, as we were knocked half in-to.  At the time we were struck I was knocked unconscious, and fell about 25,000 feet, before I knew I was even out of the ship.  Never saw any of the other boys.  I received a little rough treatment from the Germans when I hit the ground, and was unable to tell where I was.

He also marked Magdeburg on another map in his World Atlas and wrote “Belgard” in the top margin. Belgard, or Bialogard, is the county in which Gross-Tychow (now Tychowo), Poland lies, home of Stalag Luft IV.

Stalag Luft IV in Gross-Tychow was where Dad spent the darkest days of his life. It was one of the worst WWII prison camps in Germany, where prisoners were mistreated and underfed. It was the camp from which prisoners were marched in early February 1944, in one of the worst winters in Germany’s history, until their liberation in late April/early May.

These places, Magdeburg and Belgard, these two places on his map, would be burned into my father’s memory and soul forever. He would never return to those places for the rest of his life, but the memories of them remained with him every day and every night.

I am drawn to these places and I hope one day I will visit both. Neither look the same today as what Dad experienced in 1944, but I wish to stand on the soil where he hit the ground in his parachute, where his B-17 crashed to earth, and where he was held a prisoner behind barbed wire. I would like to walk the roads he marched as a prisoner of war by day, and see the barns where he slept in the hay at night.

I lost Dad almost thirty-five years ago. He died at the age of sixty-one. His heart gave out when he was too young to leave us. The mid-air collision and his subsequent time as a prisoner of war are what killed him. But he was tough and it took him another thirty-eight years to die. I would like to have had him around for another thirty years or more, so he could watch my sister and me mature, walk us down the aisle, and hold his grandchildren. But I understand now that the only way he found peace from the war was to leave this life and those horrible memories behind.

Rest in peace, Dad. I will never stop loving you.

By thearrowheadclub in Farrar, George Edwin, Stalag Luft IV, The Black March on July 5, 2017.
← From the US to the UK and Beyond Rendezvous in Savannah →