Early on in the 8th Air Force in WWII, when an airman completed twenty-five missions, his tour of duty with his bomb group was complete and he was allowed to return to the States. That didn’t mean the war was over for him. He was assigned to a stateside unit or began training for another assignment. Later, the number of missions was increased to thirty, and even later to thirty-five.

An airman who completed his tour of duty became a member of an elite club, the Happy Warrior’s Club and/or the Lucky Bastard Club.

Robert Edward Kreuscher, a flexible gunner with the Raymond Causa crew of the 546th Bomb Squadron, completed his thirty-fifth mission on December 18, 1944, earning his ticket home.

James Kermit “Short Round” Kangas, the ball turret gunner with the Raymond D. Cook crew of the 546th Bomb Squadron, completed his thirty-fifth mission on April 25, 1945, which was the very last 384th Bomb Group mission of WWII. 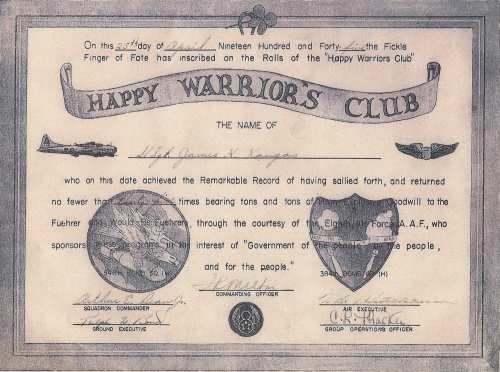 On this date, the Fickle Finger of Fate has inscribed on the Rolls of the “Happy Warriors Club” the name of …

…who on this date achieved the Remarkable Record of having sallied forth, and returned no fewer than thirty-five times bearing tons and tons of High Explosive Goodwill to the Fuehrer and Would Be Fuehrers, through the courtesy of the Eighth Air Force, A.A.F., who sponsors these programs in the interest of “Government of the people, by the people, and for the people.”

On this day, April 25, 1945, the brass balls go up for entrance into The Lucky Bastard Club. S/Sgt. James Kangas, who finished his tour with the four-leaf clover imprinted firmly on his posterior, after zig-zagging through space in his Flying Fortress on 35 missions of a re-arranging operation on Der Fuehrer’s domain – using tools issued by the 8th Air Force and provided by a nation dedicated to exterminating the paper-hanger’s crackpot ideas on altering the face of the earth.

The “ground pounders”, or those servicemen who were not members of an air crew, were shown appreciation for their service in the form of an Army Air Forces Certificate of Appreciation for War Service. This one was presented to Theodore J. Bakalarski, an Airplane Electrical Mechanic with the 443rd Sub Depot.

Signed by none other than Hap Arnold, it reads:

I cannot meet you personally to thank you for a job well done; nor can I hope to put in written words the great hope I have for your success in future life.

Together we built the striking force that swept the Luftwaffe from the skies and broke the German power to resist. The total might of that striking force was then unleashed upon the Japanese. Although you no longer play an active military part, the contribution you made to the Air Forces was essential in making us the greatest team in the world.

The ties that bound us under stress of combat must not be broken in peacetime. Together we share the responsibility for guarding our country in the air. We who stay will never forget the part you have played while in uniform. We know you will continue to play a comparable role as a civilian. As our ways part, let me wish you God speed and the best of luck on your road in life. Our gratitude and respect go with you.