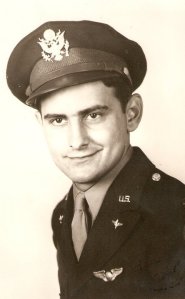 Chester “Chet” Rybarczyk had finished his tour with the 384th and returned to the states.  He wanted to talk to George Edwin Farrar, his crewmate on the John Oliver Buslee crew after learning that Farrar was on his way home from the war.  Rybarczyk was fortunate to have not been on Lead Banana with the Buslee crew on September 28, 1944.

With the war over in Germany, I was wondering if you had heard from George. Has he been home yet? I’m anxious to hear from him or of him. So if you will be kind enough to send me his address or send him mine.

I am the navigator from the crew. I have been in the States for some time now. I wrote to you once before if you can remember. I guess you could with a name like mine.

I really don’t have much more to say. I hope to hear something soon. Give my best to all.

Thank you to Tony Rybarczyk, Chester’s son, for providing the photo above.