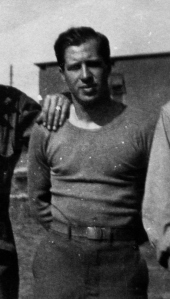 Erwin V. Foster was the original ball turret gunner, also known as the belly gunner, of the John Oliver (Jay) Buslee crew.  His first combat mission was mission 171 on August 4, 1944 to a Crossbow (V-Weapons) Rocket Research & Development Complex in Peenemunde, Germany.  Foster flew eight missions with the Buslee crew and was not on the Lead Banana with his fellow Buslee crewmates when Lazy Daisy collided with it on September 28, 1944.  Foster survived thirty-five missions with the 384th, with his last mission on February 28, 1945, mission 277 to the railroad marshalling yards in Hagen, Germany.

Erwin Sr.’s death left Erwin Jr.’s mother, Mary C. Foster a young widow with a son who had just turned one year old barely a month before.  It must have been a tough time for Mary trying to raise a child alone  in the early 1920’s.  The 1925 New York state census shows Erwin Jr. living at 169 Horseheads Boulevard in Horseheads (Chemung County), New York with the Horton family.  The head of household at the Horton home was Lizzie L. Horton (age 52).  Lizzie was living with her son, Charles Horton (age 20) and daughter, Gladys M. Horton (age 16).  Also living with them were Erwin V. Foster (age 5) identified as a boarder and Raymond Carpenter (age 8), also identified as a boarder.  Mary Foster was not listed as living in the home.

In 1930, the Federal census shows Mary Foster (roomer) and Ruth Carpenter (head of household), both widows, living at 401 Elm Street in Elmira (Chemung County), New York.  Neither of their sons, Erwin Foster, Jr. or Raymond Carpenter, were listed on the record as living with them.  Mary’s occupation was listed as stenographer and Ruth’s was beautician.

By the 1940 Federal census, Mary Foster and Ruth Carpenter were still living together, now at 76 York Avenue in Elmira.  Ruth’s occupation was still beautician, but Mary was now listed as a clerk for the railroad.  Both of their sons were now listed as living with them.  Erwin was now 20 years old and a student in his second year of college and Raymond was 23 and a gas station attendant.

In 1942, public records listed Erwin Jr. as living at 705 Winsor Avenue in Elmira.  On November 27 he enlisted in the service in Binghamton, New York.  His enlistment record indicates he was 5’5′ and 143 pounds.  His civilian occupation was listed as “embalmers and undertakers.”  He was single with no dependents.

Erwin V. Foster was one of the lucky ones to survive WWII.  On April 22, 1945 he completed his tour with the 544th Bomb Squad of the 384th Bombardment Group of the 8th Air Force and returned to the states.

After WWII he married Virginia S. (maiden name unknown).  Public records show them as married and living together between 1952 and 1958, although I cannot find record of their exact marriage dates.  On July 1, 1961, Erwin married Bessie Irene Allen in Elmira.  Bessie died on October 12, 1994.

Erwin died at the age of 61 on June 30, 1981 in Horseheads (Chemung County), New York and is buried in the Maple Grove Cemetery in Horseheads.

By thearrowheadclub in Foster, Erwin V on June 2, 2014.
← No Delivery of Next of Kin Parcels Seven Months →