I believe this letter was the one that followed the New Year’s Eve telegram to the Farrar family that brought the news of their son George Edwin Farrar’s imprisonment by the German government.

A sample of Information Circular No. 10:

The following information, subject to change, is substantially all that is available at this time.

TREATMENT AND CONDITION OF PRISONERS OF WAR – Reports received from neutral sources indicate that American prisoners of war interned by Germany, Hungary, Rumania, and Bulgaria are receiving fair treatment and these Governments are complying substantially with the terms of the Geneva Convention considering all the circumstances which accompany war.  This convention requires each interment camp to have a properly equipped infirmary with adequate medical personnel in attendance.  Prisoners of war must be medically examined at least once a month, and any who are ill must be given treatment.  It requires also that notification concerning capture indicate fact of wounds or serious illness.  The letter accompanying this circular gives all information in possession of the Bureau at this time.  If no mention is made of health, wounds, or hospitalization, such matters were not mentioned in the cable received.  If information of that nature is received, the emergency addressee and other interested persons will be notified promptly.

INSPECTION OF CAMPS – The Geneva Convention provides for the inspection of prisoner of war camps by representatives of the Protecting Power and delegates of the International Red Cross.  If the representative or delegate finds grounds for complaint that cannot be settled at the time inspection is being made, he submits such complaints formally to the Detaining Power concerned.  Since the Protecting Power and the International Red Cross act independently, there is double scrutiny of conditions in the camps.  Reports of these inspections are forwarded periodically to this Bureau.

The document in its entirety: 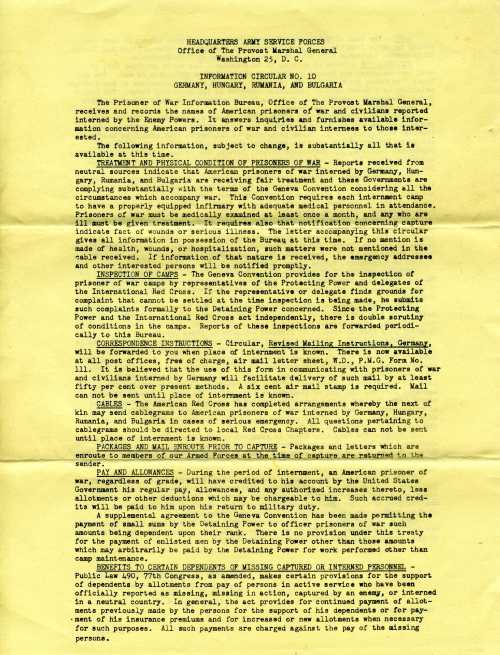 Page 1 of Information Circular No. 10 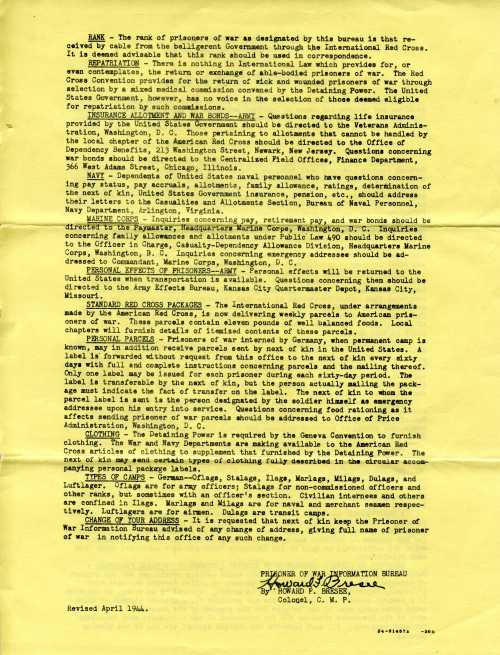 Page 2 of Information Circular No. 10