The following biography of Lt. Col. Wallace Storey, USAF (Ret.) is provided for use on The Arrowhead Club website by the kind permission of the author, Wallace A. Storey, who asserts full ownership of copyright for the material. Use of this material is limited to the following provisions.  This biography is intended for unrestricted private use. Please copy and use as needed to support your WWII research. If you wish to incorporate this information in a commercial product of any kind, request authorization from Lt. Col. Wallace Storey, USAF (Ret.) in advance.

Following the outbreak of World War II and the entry into the conflict of the United States, Wallace A. Storey joined the US Army Air Force on August 13, 1942. Upon being called to active duty in February 1943, he went through pilot training in the Central Flying Training Command in Texas. Preflight was completed at San Antonio, Texas and Primary Flight Training at Jones Field, Bonham, Texas. After Basic Training at Perrin Field, Sherman, Texas and Advanced Training at Ellington Field, Houston, Texas, Aviation Cadet Storey graduated in Class 44C and was commissioned a Second Lieutenant in the US Army Air Force.

Storey completed B-17 Flying Fortress Training at McDill Field, Tampa, Florida and was sent to England in June of 1944, joining the 8th Air Force. His service in the 8th was in the 545th Squadron of the 384th Bomb Group. His service there involved attacks on the V-1 sites in France, support of army and paratroop attacks in Operation Market Garden, the breakout at Metz, and during the Battle of the Bulge. The majority of his missions were against German Chemical and Synthetic Oil Refineries.

Storey flew 16 missions as co-pilot and 19 as first pilot with the same crew. 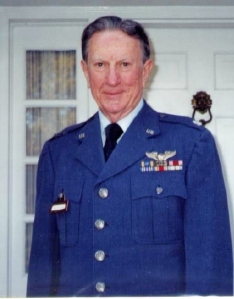 Lt. Col. Wallace Storey lives in Spartanburg, South Carolina and can be contacted through e-mail at wasmrl@att.net.

With the exception of material in this post copyrighted by Wallace A. Storey, © Cindy Farrar Bryan and The Arrowhead Club, 2013